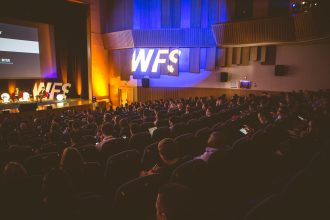 WFS has the support of LaLiga, which will help strengthen the image and development of the Spanish football industry abroad.

During 2 days, Madrid becomes the capital of this thriving industry by bringing together the main actors of the global football scene ready to drive business and experience the phenomenal atmosphere of Spain’s football industry.

This year WFS will have 2000+ attendees from 70+ countries and 60+ keynote speakers.

During the congress, the most important topics surounding the football industry will be discussed such as TV rights, fan engagement or innovation and new technologies. Attendees will also enjoy parallel presentations with one on one talks and practical presentations with Football Club´s and a service providers.

WFS will have an Expo Area where sponsorship activations, media interviews and product presentations will take place. Following the success achieved in the first edition of the StartCup Competition, where 38 aspiring start ups presented their technological solutions applied to the football industry, this year 8 foreign start ups have already applied to participate in the II StartCup Competition.

This year for the first time WFS will celebrate the WFS Industry Awards during the gala cocktail that will take place at the Neptuno Palace on the night of October 16th. These awards will recognize and reward the work achieved by professionals in the football industry, those who in their daily life, after the 90 minutes of play, make this sport of entertainment a real economic engine that already represents close to 1% of Spain´s GDP. We will reward the achievements of football club managers, agencies, sponsors, associations, NGOs and institutions working in the worlds most popular sport.

With a panel of distinguished judges selected for their expertise, the WFS Industry Awards will become a major networking event linked to the annual World Football Summit congress. The nominees will compete internationally for these awards with the following categories: Executive of the year, Best Marketing Initiative, Best Supplier for the Football Industry, Best CSR activity and Stadium of the year.

Those who want to participate have until July 20th to submit nominations, after which in September, nominees will be announced in each category. With this initiative, World Football Summit hopes to continue to attract the most important personalities of the football industry as well as identifying innovative projects around the world in order to give recognition to the professionals transforming the sector.

So far, more than 150 companies and personalities have confirmed their participation at this important event that will transform Madrid, during 2 days, in the world`s capital of the football industry.