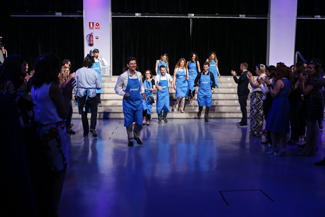 Madrid Convention Bureau, within the Madrid Destino Tourist Division (Madrid City Council), organised last 14th June a meeting with its partner companies. A total of 200 people attended this networking meeting in the TeatroGoya Multiespacio, one of the special venues associated with MCB.

This event, whose first edition was in 2009, has become a meeting point where partner companies can exchange views on the profession. Thus, the MCB gets to promote synergies and enhance the active participation of all partners.

The aim of this new edition of Networking Event was also that all member companies interrelate and know directly the method of work and promotion of the MCB in the source markets.

First in London and Chicago in 2015, and in Hamburg and Munich this year, the MCB has launched innovative presentations in which first-hand experience takes precedence over theoretical knowledge and assistants go from being mere spectators to being participants in games applied to promoting the target destination.

In the case of Networking Event, all activities have revolved around two well-known symbols of the city of Madrid: Las Meninas and the “cat”.

The result of these presentations is that attendees learn experientially and in a fun way the attributes and positive qualities of the target destination that in the long run linger in the memory more strongly than any statistic. Such activities not only allow participants to have fun, but there is a very high interaction among the participants, impossible to obtain with other formats.

The MCB has received a very positive response in all the presentations made so far in which attendees have expressed a high degree of satisfaction. With this new format, the MCB is leader in the use of tools to attract major events.