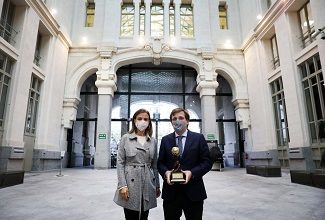 For the second year running, Madrid has been named the World’s Leading Meetings & Conference Destination at the World Travel Awards.

Tourism industry professionals chose Madrid as the best destination over such cities as Paris, Dubai and Las Vegas.

The Tourism Department, through the Madrid Convention Bureau, is working on a positioning plan to revive meetings tourism in the city in the wake of the pandemic.

Madrid has consolidated its position as the leading destination for meetings tourism worldwide. The Spanish capital has just taken first place in the World’s Leading Meetings & Conference Destination category at the 27th World Travel Awards, the tourism industry’s premier awards ceremony. This year, it took place during a virtual gala broadcast from Moscow.

Having won this recognition for the first time last year, the city of Madrid has now cemented its position as the best destination in the world for organising professional meetings, beating out cities like Paris, Dubai, Singapore or Las Vegas to do so.

The award recognises the city’s professionalisation, competitive edge and the high quality of the services in this sector. It also highlights the confidence the city inspires among the MICE professionals who participate in these annual awards which are widely recognised as a seal of excellence in tourism.

This is the third international MICE tourism award Madrid has won this year. At the beginning of November and for the third year running, the capital received the award for Europe’s Leading Meetings & Conference Destination at the regional edition of the World Travel Awards. Just a few days ago, Madrid was voted Best MICE Destination in Europe at the first edition of the World MICE Awards.

Major assets
Madrid is a leading destination for meetings tourism thanks to its unique and specialised offering for this segment. Major assets include its meeting and exhibition centres, notably IFEMA, its unique special venues, an extensive hotel infrastructure and its excellent connectivity and outstanding transport network. This in conjunction with other aspects such as its highly professional tourism industry, the safety of the destination and its extensive range of cultural and leisure activities, makes Madrid the best choice for any professional event.

The awards are a tremendous boost for the capital which, through the Tourism Department and Madrid Convention Bureau (MCB), continues to strive to regain the trust of organisers and professionals in the MICE sector, whom they keep up to date with all the latest protocols being put in place to ensure Madrid is one of the world’s safest destinations. The city also continues to work tirelessly to guarantee the excellence of aspects that have become Madrid’s hallmarks: outstanding services, innovative proposals offered by the meetings tourism sector, and the dedication of its professionals.

MICE strategic positioning and promotion plan
To demonstrate its commitment to the sector, the Tourism Department is implementing new promotional and communication activities in which the more than 200 companies that are members of the Madrid Convention Bureau have a special role to play. This plan adds impetus to the public-private partnership that the City Council has always been committed to and which it intends to bolster now more than ever before.

The main lines of action that will soon be implemented have been defined in a strategic plan designed to position and promote the city, which will reactivate and strengthen the sector in response to the crisis caused by the COVID-19 pandemic. In the first phase, the promotional activity will be focusing on the domestic and local market, as well as on the association market. Another significant line of action will be training activities for the members of the Madrid Convention Bureau.

Furthermore, emphasis will continue to be placed on the creation and dissemination of tools to ensure international professional meeting and event organisers know that Madrid has successfully adapted to become a reliable destination in which to carry out their projects.