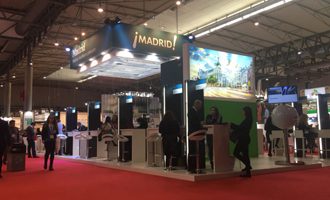 The aim is to strengthen Madrid’s image as a leading destination for the organisation of professional meetings, promoting its potential, amenities and services as well as its new tourism resources.

Madrid’s stand, at which MCB was accompanied by 22 associated companies, was the setting for 500 business meetings and supplementary promotional activities aimed at promoting the capital’s wine tourism attractions and new spaces.

Participation in this fair leads to the establishment of contacts and agreements with agents in the sector and bolsters Madrid’s tourism industry, creating business opportunities for MCB’s associates.

With its participation in this fair, Madrid Convention Bureau winds up its 2017 promotional calendar. Over the course of the year, the specialised body has carried out 23 promotional activities abroad and organised eight fam trips.

Madrid has kept its date with one of the top-rated MICE tourism meetings, the IBTM World Fair. Once again, the capital took part in the annual fair, which was held from 28th until 30th November in Barcelona. Agencies, associations, large enterprises and professional organisations attend the fair to find out about market trends, goods and services.

The fair enables Madrid to promote itself as a business tourism destination by increasing awareness of the capital’s potential as a venue for professional meetings as well as of its amenities and services and the latest developments in the destination that enhance its MICE sector: hotel openings, special venues and new spaces for major events.

500 business meetings with industry professionals
For the seventh year running Madrid Convention Bureau (MCB) promoted all of these attractions from its own stand, with an area of 120 square metres, at which 22 companies associated with MCB were present. The stand was designed by Tridente, one of MCB’s associates, and was the setting for multiple business meetings held by MCB (over 180 meetings in total) as well as by co-exhibitor companies. These meetings exceeded 500 in total.

To offer attendees of the fair some alternative options, Madrid’s stand also hosted supplementary promotional activities designed to promote wine tourism attractions and new spaces in the capital. It did so via a tasting of wines with the Madrid destination of origin certification, organised by the wine cellar from Madrid Moradas de San Martín, and the presentation of the new gastronomic venue Gran Clavel, which is soon to open in Gran Vía, an avenue with a hundred years of history, and aims to reclaim the concepts of the Madrid vermouth bar, wine bar and informal eatery. Furthermore, to support and facilitate promotion of all information relating to Madrid, the city’s range of tourism options was featured in the fair’s show dailies.

Business opportunities for Madrid
With all of these initiatives, Madrid Destino and MCB establish contacts and be able to reach agreements with agents from the sector, supporting Madrid’s tourism industry and –in short– creating business opportunities for the MCB associates taking part in the fair. These organisations were in this case: the DMCs Eventisimo, Cititravel, Conventia and AIM Group, the Municipal Conference Centre and the IFEMA Convention and Congress Centre, the hotels Puerta América and Intercontinental (five stars) and Emperador, VP Jardín Metropolitano, Novotel Madrid Center, Rafael Hoteles Atocha, Vincci Soho and Hilton Madrid Airport (four stars), the special venues Teatro Goya, Santiago Bernabeu-Real Madrid Stadium and Linares Palace, as well as El Corral de la Morería, the regional government of Madrid, Autocares Esteban Rivas, Elenco Audiovisual and Proyect Arte.

Participation in the IBTM World Fair also enables Madrid Convention Bureau to further future partnerships with other sectors, such as the media and event organisers in strategic markets, with a view to planning the 2018 promotional strategy or following up with current clients.

Over 20 international promotional activities
With its presence at this fair, Madrid Convention Bureau, a body that specialises in promoting Madrid as a venue for congresses and professional meetings and acts as a specialiased point of contact between Madrid-based enterprises linked to the MICE industry and organisers, winds up its 2017 international promotional calendar, which included 23 promotional activities abroad. Of particular importance were the destination presentations given in the United States (New York and Washington), which garnered a high level of satisfaction among participating partners as well as attendees. The MCB team also organised and carried out eight fam trips, enabling Madrid to be presented to one hundred agencies and corporate clients. /