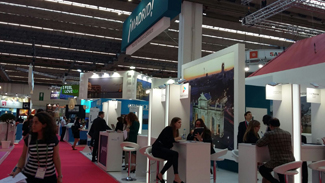 Madrid Convention Bureau (MCB) was present at the latest edition of IMEX Frankfurt, one of the leading tourism events in the MICE industry, which to date has been held in the German city of Frankfurt. The MCB’s presence at this gathering, which draws professionals from all over the world, enables it to promote Madrid and bolster its position as a major international MICE destination. The aim is to strengthen and maintain an image of leadership and professionalism across Europe, particularly in Germany, which is one of the main countries of origin of international tourists in the capital, according to data contained in the 2015 MICE Tourism Assessment Report.

Madrid City Council has always been committed to this exhibition, regarding it as one of the key events in its strategy of international promotion of MICE tourism and including it in Madrid Convention Bureau’s calendar of activities since 2010. With a total exhibition space exceeding 17,000 square metres, the annual event was visited by over 12,500 professionals last year and was the setting for more than 65,000 pre-scheduled meetings.

Over 300 business meetings
With the aim of creating business opportunities that translate into income for the city, making new contacts and closing deals with industry agents, additional meetings were held with potential buyers. In total, 300-plus business meetings were conducted over the three days of the fair, taking into account those scheduled by Madrid Convention Bureau and parallel meetings and encounters with visitors to the stand manned by the twelve associates.

Other international promotional activities
Prior to IMEX Frankfurt, this month MCB attended two other professional gatherings: the Associations World Congress, which was included in the capital’s promotional calendar for the first time, and the international fair M&I Forum The Americas.