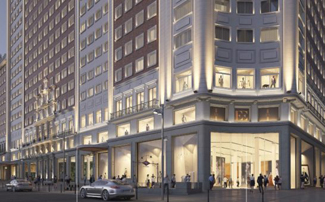 Madrid’s hotel industry is booming, with new openings, international investors who have their eyes on Madrid, and a number of annual visitors that is steadily on the rise.

Given those circumstances, Spanish financial newspaper Expansión recently undertook an in-depth analysis of the luxury hotels that have opened or will be opening in Madrid. Here’s a summary of the information provided:

International chains, such as Hyatt, Four Seasons and Starwood; domestic operators, including RIU and VP; promoters like Cordish, and KKH and other investment funds are currently working on projects that will bring another 4,413 hotel rooms to the region’s hotel offer.

Four Seasons is in charge of the flagship project, within the “Canalejas” urban development plan. Taking up seven historical buildings, the complex will include a 200-room boutique hotel and 22 residences with access to the hotel services. Inauguration is planned for the first quarter of 2019. The project also features two restaurants, meeting rooms, spa and indoor swimming pool.

Also in Plaza de Canalejas, Marriott Starwood, the largest hotel chain in the world, has joined Hong Kong-based Indian investor Harry Mohinani, to develop one of a series of three hotel projects for Spain: Hotel W Madrid, with 160 5* rooms. Mohinani will also be developing a second project with Aloft: a luxury hotel with 139 rooms located on the capital’s Gran Vía.

Edificio España, one of the city’s most iconic buildings, located in Plaza de España, will be managed by Mallorca-based group RIU and transformed into a 4* hotel with 650 rooms, two restaurants and a roof-top swimming pool. The last two floors will accommodate a sky bar with a glass walkway for guests to enjoy stunning panoramic views of the city.

Also located in Plaza de España, hotel chain VP is wrapping up the construction of their flagship hotel: VP Plaza de España Design. The 5* establishment will have 214 rooms, distributed along the building’s 17 floors.

Last March, hotel chain Hyatt announced plans for a 159-room hotel in the last quarter of 2017 at number 31 of Gran Vía, in landmark building that dates back to the 1920s.

Last but not least, and moving towards the outskirts of the capital, US group The Cordish Companies has presented the Madrid regional government with a hotel and recreational project that will involve a 3 billion euro investment. The first stage involves the development of a luxury hotel with 500 rooms, spa, gym, resort-style swimming pool, followed by the subsequent construction of another 2,200 4* and 5* hotel rooms. The complex will also accommodate a convention centre.