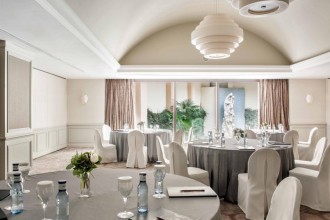 Hotel InterContinental Madrid, located at number 49 of the Paseo de la Castellana, inaugurates the renovation of its event and meeting rooms. The renovation has modernised and equipped these facilities according to the current needs of travellers and visitors on business.

As a result, InterContinental Madrid positions itself as one of the leading MICE venues, at both a national and international level. Its recognition was established recently when it was declared “Spain’s Leading Business Hotel in 2014 and 2015” for two years running by World Travel Awards, also known as the Oscars of the tourist sector.

There are a total of 15 rooms destined towards holding events and meetings, six of which have been renovated during the project, adding up to 700 square metres.

The changes brought on by the renovation include the sophisticated and neutral décor, in shades of grey to create versatile and spacious rooms full of light, which can be adapted to any client. Among other improvements along this line, the hotel has incorporated LED lighting technology and has finally obtained the Green Globe Certification for 2015 and 2016.