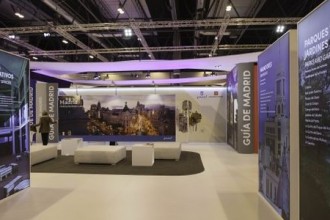 From 20 to 24 January, Madrid became the world’s tourism capital when it hosted the 36th edition of this major travel industry fair.

Madrid’s Tourism Trade Fair is a global meeting point for industry professionals and is the leading event for outbound and inbound markets in Spain and Latin America. At the 2016 show, more than 9,000 companies took part in this major event that kicks off the annual round of international travel and tourism trade fairs.

One of the key areas in which Fitur has stood out over the years is its facility for recognizing market trends and for reflecting these trends in the destinations on offer. Based on this principle, in recent years, a number of new specialist sections have been incorporated into the trade show, such as Fitur Shopping and Fitur Health, which were launched last time around to great success.

Once again, there was a specific exhibition area at the show for Fitur LGBT. This zone accommodated this distinct tourism sector, which represents a market of 6.1 billion euros per year in Spain. Fitur Know-How & Export, in its fourth edition, aimed to further international awareness of the know-how and management of Spanish tourism-related companies.

Other key areas included Fiturtech, showcasing some of the latest technological innovations, and Fiturgreen, which promoted sustainability with energy-saving measures to be applied to hotel and tourism management. As usual, Madrid, being the host city, was present at this major travel and tourism event with a stand in pavilion 9 (9C03), where it exhibited all that the capital and its region have to offer.

Madrid Convention Bureau had its own space at the same stand, providing information about its partner companies and responding to all information requests.