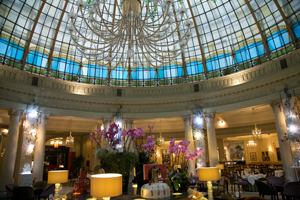 In honour of the United Nations’ declaration of 2017 as the International Year of Sustainable Tourism for Development, Westin Palace Madrid has unveiled an art installation entitled WELCOME AROUND designed to celebrate and showcase this initiative, which aims to raise awareness of the need to protect and care for our environment.

The work was conceived by designer Carmen Pousa, who used recyclable materials such as metal, plastic and wood to create a poetic interpretation that manages to divorce itself from the insignificant value of the materials used.

With this installation, Westin Palace Madrid aims to send a positive message regarding the many ways that we can play our part in sustainability; for instance, by turning something we were going to throw away into a creative solution.

Intending to surprise the observer, the designer wanted to use the iconic symbolism – so very Spanish in nature – of Las Meninas (The Maids of Honour), which she depicts in a most contemporary, almost pop, style.

The installation can be viewed from 30 January to 27 March.

Another initiative by Westin Palace Madrid aimed at contributing towards and raising awareness of the Year of Sustainable Tourism is offered by Executive Chef José Luque, with a set menu consisting entirely of regional or organic ingredients, paired with wines with the official Madrid designation of origin.

Westin Palace Madrid realises the importance of caring for our environment, and to this end it has implemented an Environmental Management System (SGMA) based on the ISO 14001 standards and on European Union Regulation (EC) No. 1221/2009, known as ‘EMAS III’, which came into force on 11 January 2010. The hotel has maintained its certification since 2003.

For several years the lights in the building have been gradually replaced with LED lighting, and every time a piece of machinery must be replaced a more energy-efficient model with a lower environmental impact is chosen. Recently the hotel installed an energy recovery system that makes use of the condensation from its cooling towers to heat the water sent to its boilers. Furthermore, Westin Palace Madrid offers event and meeting organisers the chance to contribute towards carbon footprint reduction by paying a sum calculated based on the impact of the CO2 emissions produced in association with holding their events. For more information, visit https://shop.southpolecarbon.com/

The hotel’s environment team conducts ongoing training to raise the awareness of all departments in regard to the importance of doing their part via our recycling plan.