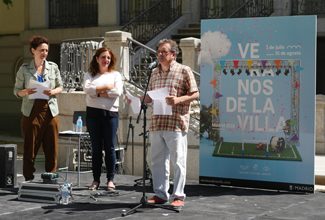 This year, Veranos de la Villa, the most important cultural festival in the city of Madrid, is coming to the city’s 21 districts in a bid to bring culture to all citizens of all ages and in the neighbourhoods where this kind of offer could not be enjoyed traditionally. The programme will run from 1 July until 31 August, with 52 concerts and summer activities livening up 36 venues across Madrid. This time round, peripheral venues are added to those in the heart of the city, which offers an opportunity to rediscover the urban territory.

The festival begins and ends with music. On 1 July, Madrid rock group Los Enemigos will kick things off at Pilar García Peña Auditorium in Pinar del Rey Park (Hortaleza). Kiko Veneno and Martirio will add the finishing touches at the same venue on 29 and 30 August, respectively.

In addition to music, film, theatre and dance, this edition includes varied and participatory activities such as kite flying, zarzuela concerts by bicycle, circus shows among the pine trees, ballroom dancing in front of the Royal Palace, salsa at Plaza de La Remonta and a floating cabaret on the lake at Casa de Campo Park.

It is a high quality programme, with something for all budgets: 80 percent of the activities are free and the rest are at very affordable prices, between 3 and 12 euros.

Flamenco dancer and choreographer Rocío Molina and Brooklyn dancer Storyboard P will take to the stage together at the Glass Pavilion in Casa de Campo Park (Moncloa-Aravaca). Both use improvisation in their performances.

The voice of Mayte Martín will ring out in the auditorium at the Linear Park of the Manzanares River (Usera). She will be performing self-penned songs from her Tempo rubato show, romantic ballads with an inevitable flamenco flavour, accompanied by the Qvixote string Quartet.

The dance duo Rojas y Rodríguez are celebrating 20 years on stage, and will mark the occasion with an intimate evening of unorthodox Spanish dance and flamenco at Olivar de Castillejo (Chamartín).

Among the theatre productions, the Margi Kathakali company together with Nacho García will give us their version of Don Quixote to mark the fourth centenary of the death of Miguel de Cervantes, coinciding with the celebration of the Year of India in Spain: a dialogue between two cultures and traditions, between the legends of medieval knights and the mythology of Ramayana and Mahabharata. Performances will take place on 30 and 31 July at Naves del Español in Matadero Madrid (Arganzuela). This municipal theatre will also stage the play Testigo en ruinas (Witness in Ruins), a reflection on the consequences of uncontrolled urban development brought to the festival by the Colombian company Mapa Teatro.

The Marie Chouinard dance company will stage their show Hieronymus Bosch: The Garden of Earthly Delights at Naves de Matadero. This is a world pre-premiere of the work by the Canadian choreographer, co-produced with the Jheronimus Bosch 500 Foundation (Netherlands) to mark the fifth centenary of the painter’s death.

Standout dance performances include those by the Daniel Abreu Company and Ricardo Santana at the eco-boulevard in Villa de Vallecas.

Cabaret is the guest of honour on the lake at Casa de Campo Park (Latina). Veranos de la Villa maintains and expands the audience-involving Cabaret Flotante (Floating Cabaret) entertainment that has been held for the past seven years at this very spot. Bands of all styles, especially cabaret and swing, will offer jam sessions on board the lake boats taking us back to the 1920s.

Kites and a public water fight

Juan Carlos I Park (Barajas) has all the requirements for kite flying. Amateurs regularly meet there to practice the sport. The summer festival will bring professional displays of single-line and stunt flying featuring giant-sized, powerful, artistic, multicoloured kites. The public can also bring and fly their own kites, and a workshop will teach children how to make them.

Veranos de la Villa gives its support to a celebration that attracts more and more followers every year: the Naval Battle of Vallecas, which has been held for the past 35 years. It all began spontaneously in 1981 under the sweltering summer heat, when a group of youngsters decided to cool themselves down with water on the streets. Over the years this public water fight has become increasingly popular, leading to the founding of the Marine Brotherhood of Vallecas with the slogan Vallecas, Sea Port, which in celebratory mood promotes utopia as a driving force for change.

Zarzuela by bicycle and circus shows

Zarzuela is very much part of the festival. A travelling concert will see a choir cycle around places in the city related to well-known zarzuelas set in Madrid. En route they will meet up with amateur choirs from the city. Spectators can join in the biking tour and sing at the mini-concerts that will take place at the different stop-off points.

The Akoreakro group will be bringing their circus show to the Escenario Puerta del Ángel outdoor stage at Casa de Campo Park. Six acrobats and five musicians will lead this extravaganza with a touch of burlesque suitable for all ages.

What’s more, the twelve actor-acrobat-singers of the Essai de Cirque acrobatic group, from Tangier, plus guest musicians, will perform in the auditorium at the Puente de Segovia bridge lower gardens located in Madrid Río (Latina).

The programme includes two evening circus performances for all audiences. The first at Emperatriz María de Austria Park (Carabanchel), with the participation of La Industrial Teatrera who will perform, clown style, Naúfragos and offer a flying-trapeze workshop, and Eia, a company of Spanish and Italian acrobats. The second performance will be at Valdebernardo Forest Park (Vicálvaro), featuring YiFan, Guillem Albà & La Marabunta. There will also be a flying-trapeze workshop.

Aragonese singer Carmen París and Valencia’s Pep Gimeno “Botifarra” will perform with the Municipal Symphonic Band in the South Patio at Conde Duque (Central). This orchestra will also take to the stage with soprano Belén Roig. And at the same venue, the Bob Sands Big Band will have the audience dancing to their grooves.

Electronic music will be represented by Christian Fennesz & Suso Díaz, at a venue well suited to the occasion: the Museum of Aeronautics and Astronautics in Cuatro Vientos (Latina). What’s more, Vessel and Tim Hecker will be performing at the Satellite Pavilion in Casa de Campo Park (Moncloa-Aravaca).

The folk music of Eliseo Parra can be heard in the auditorium at the Linear Park of the Manzanares River (Usera), and the classic pop of Nothing Places in the sports centre at Manoteras Park (Hortaleza).

Music and the spoken word combine in Poesía o Barbarie (Poetry or Barbarism), a literary jam session featuring guest poets, and in Kiosquerama, a travelling festival of contemporary music that reclaims the bandstands in parks and gardens as public spaces. They will take place at Cuesta de Moyano and at the El Retiro Park bandstand, both located in the Retiro district.

The indie-folk-rock sounds of Damien Jurado are sure to be another crowd-pleaser. One of the leading singer-songwriters of Northeastern USA, he will be in concert at a very special venue: the Quinta de los Molinos Park tennis courts (San Blas).

As for dancing, Septeto Nabori offers traditional Cuban rhythms, and Salsódromo, an initiative promoting urban harmony, will stage a DJ session featuring the best salsa from the seventies. The venue will be Plaza de La Remonta (Tetuán). And on the esplanade in Calle Bailén, facing the Royal Palace (Centro), there will be open-air ballroom dancing featuring an orchestra.

No se canta con la boca llena (No Singing with your Mouth Full) is the title of a celebration-of-sounds gastrotour through the neighbourhood of Fuencarral, a two-hour musical and culinary tour culminating in a street party, live music and a large edible model of Poblado Dirigido de Fuencarral (Fuencarral 1950s Housing Development).

The performance group Los Torreznos will present El Dinero (Money), a sharp, witty show. Meanwhile, Cuqui Jerez and Pirotecnia Vulcano have put together a firework display especially for Veranos de la Villa designed from a choreographic point of view. All will take part in the Sunset in the Park celebration at Tierno Galván Park (Arganzuela).

The Summers at the Price Festival is a firm favourite among Madrid City Council’s cultural offerings as part of Veranos de la Villa.

Click on this link for the promotional video of Veranos de la Villa: