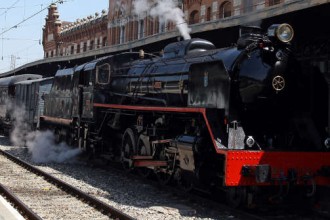 The Strawberry Train – or “Tren de la Fresa” – sets off in the spring and summer seasons, making the same journey it has traditionally taken since 1984 between Madrid and Aranjuez. The train, a replica of the very first train to operate in the Region of Madrid, leaves from the Railway Museum.

The Strawberry Train is scheduled to make a total of 21 trips during this season, with a first phase operating from 2 May to 21 June and a second phase running from 19 September to 25 October.

In 1851, Queen Isabella II officially inaugurated Madrid’s first section of railway track, the second to be built on the Peninsula, linking the Royal Palace in Aranjuez with the capital. The railway, which was built initially with the intention of linking Madrid with the Mediterranean Sea, finished at Aranjuez station but, to make life more convenient for the monarch, the line was extended to the Palace. Since 1984 the Strawberry Train has been commemorating this revolutionary invention that symbolised the arrival of the industrial age in Spain.

The Strawberry Train consists of a 1960s locomotive and guard van plus four vintage wooden coaches called “Costa”, built between 1914 and 1930, which provided the local train service for the MZA (Madrid-Zaragoza-Alicante) railway company.

On arrival in Aranjuez visitors are taken on a guided tour of the Royal Palace, which stands between the rivers Tajo and Jarama and is surrounded by beautiful gardens. They are then free to visit the Royal Barges Museum, which houses the royal barges and the vessels that made up the Tagus fleet back in the 17th century. The day ticket includes a 50% discount on entry to the Bullfighting Museum, as well as a number of special offers and discounts on the city’s cultural and tourist services.

The Strawberry Train is an initiative that enables visitors to enjoy a pleasant trip in a vintage train while they marvel at the lovely countryside around the Royal Residence of Aranjuez, declared a World Heritage Cultural Landscape by UNESCO.