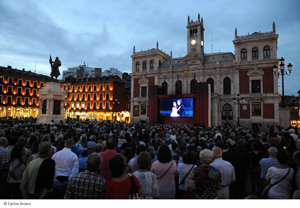 Teatro Real is getting ready to commemorate two key dates: the 200th anniversary of its foundation in 1818 and the 20th anniversary of its reopening in 1997. The only way to pay tribute to such an important milestone is to choose a range of initiatives that, without losing sight of a past that deserves to be honoured, looks towards the future with conviction.

Celebrating 200 years of an institution such as the Teatro Real is a unique opportunity to promote and consolidate its identity as a top level cultural institution and promote opera in Spain as a cultural meeting point, thanks to a commemorative programme that started in January 2016 and will continue until late 2018. The fact it has been declared an event of exceptional public interest also means that Teatro Real’s role in history and its contribution to culture will be greatly recognised.

An extraordinary artistic programme will make up the central theme of the bicentenary commemoration, expanding Teatro Real’s repertoire with essential titles that have not yet been included, particularly 20th-century classics that alternate with great Romantic operas, less widely known baroque and classical works and important 21st-century world premieres.

The future prospects of Teatro Real have done nothing but grow over time. At present it is firmly established as one of the great international focal points of opera activity, undeniably proven by the fact that the theatre has plans to stage an increasing number of coproductions over the next three years, thus associating it with many leading opera companies from around the world.

Teatro Real is going to take opera onto the streets by broadcasting its own productions at institutions and in cultural and artistic centres all over Spain, as well as on screens set up in public places, so as to enable everyone to explore the relationship between opera and cinema. In addition, there will be initiatives to highlight the relationship between opera and fashion, plus educational and training activities.

The warm and clear autumn evening on 24 September was an essential ally for attracting audiences to squares and town halls across Spain to watch the live transmission of Verdi’s Otello, broadcast from the Teatro Real as part of the acts to commemorate its 200th anniversary. A highly successful day, celebrating opera and culture all over Spain.

Nearly 6,000 people gathered in Seville’s iconic Plaza de España and more than 3,000 watched the screen attentively in Valladolid’s Plaza Mayor. There was a full house in Plaza de San Bruno in Zaragoza, with over 2,000 in attendance, as well as in Chinchón’s Plaza Mayor, Plaza de los Juegos Reunidos in Alcobendas and Plaza Federico García Lorca in Getafe.

The museums and auditoriums that joined in the initiative also had full houses, and the Shakespeare Lives programme, broadcast via Palco Digital (Teatro Real’s online opera platform), reached over 140 countries.