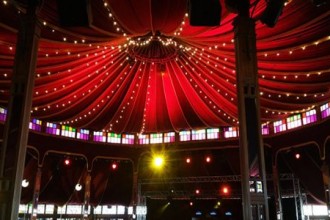 By late 2017 Estación del Norte (North Station) will have been converted into a large theatre for shows and concerts featuring a food court, but the process has got off to a grand start with the opening of a tent in the station’s parking area.

The ultimate goal is for a part of the station’s over 7,000m2 to become one of Madrid’s top tourist and cultural attractions in the next few years. The project is expected to take between five and ten years to complete.

The Gran Teatro Príncipe Pío project aims to reclaim a historic site, with an investment estimated at 9 million euros.

The food court will be developed with full respect for the site’s most characteristic elements, allowing the various spaces to be utilised without sacrificing creativity.

Use of the space begins with the opening of the largest ‘Spiegeltent’ ever set up in Spain. The ‘mirror tent’ can hold 600 people and is inspired by the ballrooms that became popular before World War Two.

The entrance hall in the station’s main building will hold a theatre that can double as a concert hall, with capacity for up to 1,100 people. Its programme will be designed by Warner. The food court will be located in Torre Poniente (West Tower), and Torre Levante (East Tower) will be home to the Spanish branch of the famous performing arts school Fame.

While building works are underway at the station, the venue’s programme will offer a mix of musicals, cabarets and concerts.