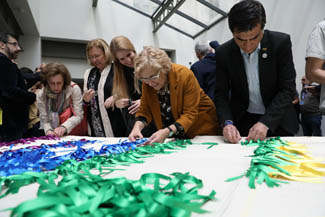 Citizen participation will be the key to the success of the WorldPride Madrid 2017 (WPM) celebrations that the capital is set to host from 23 June to 2 July. The mayor of Madrid, Manuela Carmena, affirmed this during the function that took place on 4 May at CentroCentro, when the rainbow flag, created with the participation of citizens, was presented. The flag will adorn the façade of Cibeles Palace during WorldPride.

In the same function the volunteering plan to be implemented for WPM 2017 was presented. The plan features the support and participation of over 600 volunteers from various organizations, who wanted to get involved in this global event.

Next month in June the main façade of Cibeles Palace, the seat of the Madrid City Council, will fly a 12-metre long and 6-metre wide rainbow flag made by citizens, featuring over 100,000 coloured bows.

To produce it Carmena called on Madrid’s residents as well as tourists to “put your bow on the flag, symbolically making this event we feel so proud of in our city your own”.

In the making of the flag, 3.5 kilometres of ribbon will be used for each of its colours. 21 kilometres of material will be used in total, yielding over 100,000 coloured bows measuring 20 cm each, making up a 72 square metre rainbow flag produced in a participative fashion by and for every single one of the people.

WorldPride is the largest global manifestation for human rights, social diversity and personal freedoms by citizens of a planet that’s increasingly global. It is held every four years at a global level. So far it has taken place in Rome, Jerusalem, London and Toronto.  Madrid’s selection as host city of WorldPride 2017 is a great opportunity for us to convey to the world an image of the capital as a national and international benchmark of coexistence, respect, freedom and diversity.

WPM 2017 aims to exceed expectations, becoming the most important and well-attended WorldPride of any held to date, a large global diversity event that will go down in history.