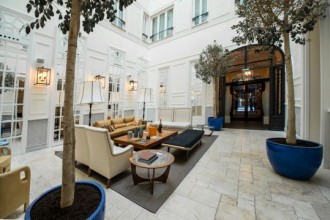 On 30 October, in the final stretch of 2015, a year of goals that were accomplished with the eagerly anticipated expansion of its premises, the ONLY YOU HOTEL & LOUNGE MADRID, a member of the Ayre Hoteles Group (the Palladium Hotel Group’s urban brand), once again shone more brightly than ever.

At the 5th “WORLD BOUTIQUE HOTEL AWARDS” ceremony, the hotel received the Best Design award thanks to the creativity of interior designer Lázaro Rosa-Violán, an influential figure on the national and international scene.

Located in a 19th-century mansion on Calle Barquillo, the Only You Hotel boasts 70 rooms and a restaurant-bar called Gastrolounge Cocktails & Music.