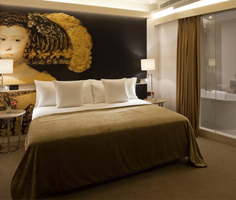 In December Madrid officially welcomed a new luxury establishment into its fold: the Gran Meliá Palacio de los Duques. The hotel is located in the building which, in the 1990s, housed the Ambassador Hotel. The Mallorcan chain gave it a complete overhaul, salvaging to the greatest extent possible the architectural features of the former Neo-Renaissance palace the hotel was built over, while introducing a contemporary flair. Since opening the establishment has been a member of the exclusive Leading Hotels of the World club.

An icon of luxury, history and art on the ‘Velázquez Route’

The hotel is located in a building which was once the Convent of Santo Domingo and the palace of residence of the Duke of Granada de Ega. The ducal family were patrons of the arts and possessed a collection of works by Velázquez which was later donated to the Prado Museum. This history inspired the hotel’s decoration, which brings Velázquez’s work back into play and blends classical elements with an utterly modern take on luxury and culture in Madrid.

Thanks to the extraordinary work of architects Álvaro and Adriana Sans, in close collaboration with the Directorate General of Cultural Heritage of Madrid and with over 20 million euros invested to date, Meliá Hotels International has designed a unique hotel that recreates the former ducal mansion and brings to life the historical gardens and magical stables of years gone by.

In addition to being a hotel and destination for high-end travellers from all over the world, Gran Meliá Palacio de los Duques aspires to become a new social and gastronomic hub in Madrid. To this end it offers its visitors a rooftop terrace with pool, jacuzzi and the best panoramic views of the city, as well as an interesting range of culinary options, including the restaurants Coroa (international cuisine open 24 hours), Montmartre (French-Spanish cuisine and wine bar) and a signature restaurant, Dos Cielos Madrid, helmed by famous Spanish chefs Sergio and Javier Torres.