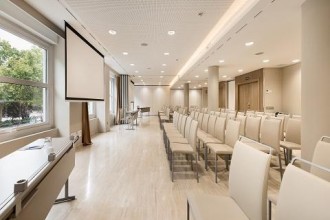 Careful to respect the hotel’s hundred-year-old architectural heritage, the remodelling project preserved emblematic features such as the hotel’s facade, the large staircase and its marble floors. After seven months of complete refurbishment, in April the NH Nacional unveiled its completely renovated facilities. The building’s common areas were redesigned to achieve more space and greater functionality, a process which resulted in new areas like the gym, the hotel’s lobby-bar and its meeting rooms.

The hotel, which boasts 206 rooms, thus joins the list of re-openings and remodelling projects that the chain has been conducting since 2015. It enters a new phase with increased orientation towards the MICE sector, with a total area of 400m2 divided into five event rooms with natural light offering views of Paseo del Prado, with a capacity for up to 300 people.

The hotel’s gastronomic offerings have also been revitalised, and it has recaptured something that was once one of its key elements: its café. Rechristened as Tablafina, the café is laid out like a wine bar that serves sausage meats, preserves and top-quality tapas under the culinary management of Abel Valverde and David Robledo, the maître d‘hôtel and sommelier at the restaurant Santceloni (2 Michelin stars).