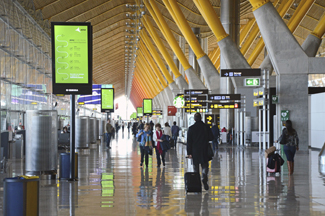 After being recognised as the best airport in Southern Europe at the Skytrax World Airport Awards 2017 in March, Adolfo Suárez Madrid-Barajas was named the best airport in Europe in several of the categories analysed at the thirteenth edition of the ACI Europe 2017, hosted last June 13th in the framework of the Annual Meeting of ACI Europe, in Paris.

Adolfo Suárez Madrid-Barajas Airport won praises for its strategy to boost the air connectivity between Europe and South America and for the continuous introduction of advanced technical innovations. The judges also noted the airport’s achievements in safety management, as well as managing operational security, and improving passenger experiences, including monitoring queue times at security checks, art exhibitions, and its personal shopper services. In addition, the airport’s diverse environmental initiatives and its focus on community relations also impressed the panel.

ACI Europe is the European branch of ACI (Airport Council International), the only global trade representative of the world’s airports. ACI represents the interests of 500 airports in 45 European countries and handles 90% of commercial air traffic in Europe, with 1.9 billion passengers a year.