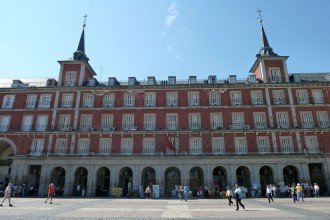 This year Madrid will commemorate the 400 years of existence of one of its most important sites: Plaza Mayor. Showcasing the square and restoring its central role in city life is the underlying aim of the celebrations surrounding its 400th anniversary. The associated programme of activities was presented in February by the Mayor of Madrid, Manuela Carmena, in the historical buiding Casa de la Panadería, in Plaza Mayor.

The activities revolve around an extensive cultural and educational programme. Revisiting some of the events traditionally held in Plaza Mayor over the course of its history, turning the site into an observer of the city’s major events and promoting access to culture are the central pillars of the programme.

The celebrations for the square’s 400th anniversary kicked off on Friday 17 February with the first and largest immersive video mapping show in Spain. The technology, namely 360º video mapping, allows spectators to completely immerse themselves in the projection, which on this occasion was projected onto four facades.

The website www.plazamayor.madrid.es, which is devoted to commemorating the square’s anniversary, will be its living memory; for the first time ever it will include information on all of the square’s traditions and legends, featuring an extensive range of documentary resources. It will also give an overview of its history through film, literature and press reports, as well as of the influence that the magnificent square has had on other squares in Latin America. In addition, it will provide specific information on scheduled activities.

Institutional collaboration
The programme was developed with the help of contributions from the Plaza Mayor 400th Anniversary Commission, whose members include associations, institutions such as the Ministry of Culture, the Madrid Regional Government, the Royal Academy of History, the Institute of Madrid Studies, the National Heritage Institution and the political parties associated with the municipal corporation. Various cultural institutions in Madrid are also taking part in the programme for the 400th Anniversary, including Teatro Real, Teatro de la Zarzuela and PhotoEspaña. /