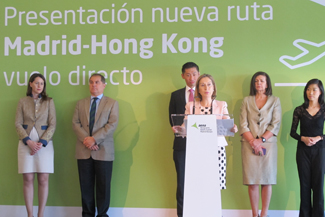 A Boeing B777-300ER is used for the flight, which operates out of the Spanish capital on Tuesdays, Thursdays, Saturdays and Sundays.

“One of our objectives is to turn this airport into a very efficient hub for the company, as it connects Asia-Pacific with Latin America”, said Kinto Chan, the airline’s Head of International Affairs, during the direct flight inaugural ceremony.

Similarly, Infrastructure Minister Ana Pastor said that the new flight connection with Asia will help diversify the role of Madrid’s airport as a distribution hub; it is currently very focused on the Latin American market. She also called the airport “Europe’s fastest-growing hub”.

The Minister views increasing the number of connections with China as a matter of great importance. As she reminded the audience, over 600 Spanish companies have a presence in the country, not to mention the growing Chinese interest in investing in Spain. In the third quarter of 2014, this investment was calculated at 290 million euros, according to data provided by Pastor.

Cathay Pacific’s Head of International Affairs expressed his confidence in the success of the new route, although he did not provide any data on the number of passengers expected for the first year. The company expects the flight to be used by business as well as leisure travellers, and he stressed that “we want the Spanish people to enjoy China’s charm and be able to discover other destinations in Asia as well”.

According to data from Aena, the new route is expected to carry approximately 113,000 passengers per year (return flights) and translate into the creation of 300 jobs.