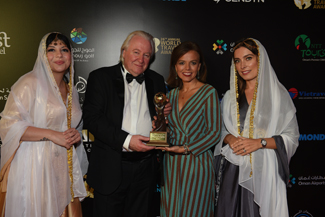 Madrid was named the World’s Leading Meetings & Conference Destination at the 26th edition of the World Travel Awards 2019 (WTA). Almudena Maíllo, the councilor responsible for Tourism at Madrid City Council, and David Noack, director of Madrid Convention Bureau, collected the award at the ceremony held last night at the Royal Opera House in Muscat (Sultanate of Oman).

Madrid was nominated in two categories: “World’s Leading Business Travel Destination 2019” and “World’s Leading Meetings & Conference Destination 2019”. It was also nominated in the latter category in 2018, but this year it took first place, beating Las Vegas -ending the city’s six-edition winning streak- and ten other competitors including Paris, Dubai, Hong Kong and Abu Dhabi. Before reaching the world finals, Madrid also took first place in the “Europe’s Leading Meetings & Conference Destination” category for the second year in a row at the regional edition of the World Travel Awards in June.

Public-private collaboration and Madrid’s exceptional dynamism, including plans to open new hotels and event venues, as well as the high level of satisfaction among clients and professionals all strengthen the city’s international image, and they were key factors in cementing its position as the world leader and enabling it to surpass previous business figures.

Against this backdrop, Madrid’s selection as host of the upcoming COP25 UN Environmental Summit is the result of the city’s professionalism, its interinstitutional coordination and its ability to meet organisers’ demands. With 20,000 professionals expected to attend the summit, organisation has commenced in Madrid in the record time of one month. It’s an exceptional case that will greatly enhance the capital’s image as a MICE tourism destination.

The World Travel Awards, held since 1993, are known as the “Tourism Oscars” in the industry and recognise merit in all of its key sectors. They also feature a high degree of participation by industry professionals around the world. Regarded worldwide as a seal of excellence in the tourism industry, the annual edition of the WTA covers the entire globe with the Grand Tour. Following a series of regional gala ceremonies, the awards culminate in a global Grand Final.

“This award for the city of Madrid recognises the work, investment and professionalisation of both public bodies and the private sector, with the aim of demonstrating that Madrid is a global leader in MICE sector amenities,” said Almudena Maíllo.

Every day, both Madrid City Council and the private sector work in partnership with Madrid Convention Bureau, a body attached to Madrid Destino and the City Council’s Department of Culture, Tourism and Sport, to achieve the goal of positioning the Spanish capital as a leading MICE tourism destination.

In addition to receiving the World Travel Awards recognising it as the world’s top meetings and conference destination in 2019 and as Europe’s top destination in 2018 and 2019, the city of Madrid also ranks third in the ICCA’s prestigious global ranking, compiled with data on over 1,600 destinations, and it is a member of the BestCities Global Alliance.

Over 200 companies are associated with Madrid Convention Bureau (MCB), representing all of the business sectors involved in MICE tourism in Madrid. In collaboration with these companies, every year MCB carries out some 30 international promotion activities to promote and consolidate Madrid’s image in the global MICE tourism sector./