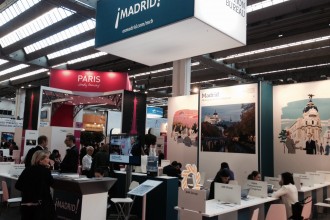 From 19 and until 21 April visitors have visited MCB’s stand in the fair, designed to communicate an attractive image of Madrid as a competitive destination for the meetings tourism.

MCB prepared an appointment diary for IMEX that included over 50 business meetings with several agents from the sector, such as buyers, representatives of international associations, specialist media, event organisers and other visitors. On the other hand, the 12 associated companies had their parallel appointments and meetings with people who visited the stand. This means that a total of about 250 business meetings could have being held during the three days of the fair.

The prestige and relevance of this event in Frankfurt converts it into the place where Madrid can maintain and strengthen its image of leadership and professionalism in European markets, in particular the market in Germany, which is the European country that sends the second-highest number of professionals to meetings and incentive travel in the capital.

A great deal of intense work has been undertaken in the last two years to improve the connectivity between Madrid and Germany and on 1 April, Iberia’s low-cost airline, Air Nostrum, inaugurated the Madrid-Frankfurt route. With this recent opening there are now 15 direct connections between Madrid and seven German cities.

Other promotional activities in Germany

Throughout the next months, Madrid City Council, through MCB, will continue to focus on the German market to promote the incentive travel and meetings of this market. A roadshow has been arranged for May that will be held in Hamburg and Munich, with the aim of presenting the attractions of Madrid to over 50 specialised agencies within the sector, so they can consider the city as an event and meeting venue.

And in June we return to Germany to offer a familiarisation trip to agencies from Frankfurt’s area of influence that will bring about 10 professionals to Madrid, providing them with the opportunity to know in situ the hotels, event venues and cultural and gastronomic possibilities the city has to offer to professional visitors.