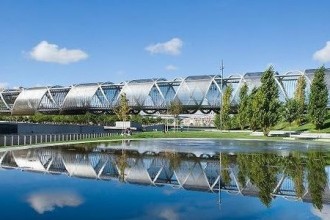 The Madrid Río Park project has been awarded the Harvard Graduate School of Design’s Veronica Rudge Green Prize in Urban Design. The internationally recognised prize honours projects that stand out for their exemplary design and capacity to transform cities by way of socially responsible strategies that improve their public space and citizens’ quality of life.

For the prize’s 12th edition the jury has chosen Madrid Río Park, a project designed by the team working under Ginés Garrido and developed by Burgos & Garrido, Porras La Casta, Rubio & Álvarez-Sala and West 8, creating 150 hectares of public space and green areas with sports facilities and other services for citizens.

To commemorate the presentation of the prize, a large exhibition of the project will be held in the GSD’s Gund Hall Gallery, which will open to the public for three months.