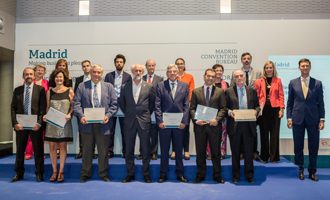 This tribute rewards the voluntary and altruistic work of professionals from the academic and/or scientific world who promote Madrid as the venue for major congresses.

Thanks to the contribution of the  new Ambassadors, 14 important international congresses have chosen Madrid as their venue this year. Since 2008, 198 individuals have received this recognition from the City Council.

The celebration of Recognition Night helps to strengthen the bonds between all those involved in the congress industry in Madrid, fostering collaboration and the achievement of objectives insofar as attracting new congresses is concerned.

After having been proclaimed as Europe’s Leading Meetings & Conference Destination during the World Travel Awards, Madrid has paid tribute to 16 professionals linked to the MICE sector (Meetings, Incentives, Conventions and Exhibitions) who promote Madrid as a venue for international congresses. Last Wednesday, the Tourism Department of Madrid City Council, in conjunction with the Madrid Convention Bureau (MCB), held the 11th edition of Recognition Night.

This annual meeting, which is part of the MCB’s Ambassadors Programme, rewards the voluntary work of individuals in the academic, scientific, business and associative worlds in Madrid, who, in the exercise of their work, encourage the choice of this city as a venue for major congresses.

Now firmly established as a gathering place for Madrid’s congress tourism industry, Recognition Night brings together some 200 representatives of both public institutions and companies directly linked to the tourism industry, such as professional congress organisers and congress centres.

The tribute, which took place in the Pavilion in the Cecilio Rodríguez Gardens, was attended by Luis Cueto, General Coordinator of the Mayor’s Office, who welcomed all the attendees and presented the diplomas; and by the Director of Madrid Convention Bureau (MCB), David Noack.

16 new “Ambassadors” of Madrid
This event was held to recognise the work put into promoting Madrid as a destination by 16 professionals linked to 14 important international congresses that have chosen Madrid as their venue during 2018. Prominent among these are the 27th World Congress of the Transplantation Society (TTS), with 3,200 attendees, which took place from 30 June to 5 July; and the AIDS congresses: HIV, Research for Prevention (HIVR4P) and the 10th Congress of the AIDS Study Group (GESIDA), which together attracted almost 4,000 attendees.

With these 16 new honourees, 198 individuals have now received this recognition from the City Council since 2008. These include representatives of such important congresses for the city as the European League Against Rheumatism (EULAR), in 2013 (14,000 delegates); the World ATM Congress, which on account of the organisers being so satisfied with the destination will be held in Madrid until 2022; or ESMO (the European Society for Medical Oncology), which has just announced that in the wake of the 2014 and 2017 editions, it will return to Madrid once again in 2020 with 25,000 people expected to attend.

The celebration of Recognition Night helps to strengthen the bonds between all those involved in the congress industry in Madrid, fostering collaboration and the achievement of objectives insofar as attracting new congresses is concerned. It also serves as an example for potential new “ambassadors”, encouraging them to promote Madrid as the venue for future events and making them aware in advance of the involvement and interest of the city and of all the business tourism professionals and bodies.

To organise this meeting, as has been the case in previous years, Madrid Convention Bureau (MCB) has enjoyed the collaboration of two associate companies: Grupo Abadías, a company specializing in the design, manufacture and supply of promotional material, and AGA Catering Gourmet, a company with more than 15 years’ experience that offers excellent homemade gastronomic proposals of their own creation.

A fast-growing industry
Madrid is a fast-growing destination and a leader in congress tourism worldwide. The “Europe’s Leading Meetings & Conference Destination” award which it has just won at the World Travel Awards, the confirmation that ESMO 2020 is to be held in the capital and the good results obtained in 2017 confirm its leadership in the field of congress tourism.

In addition, the city is in seventh position in the ICCA 2017 ranking of cities that host international congresses, with a total of almost 2,700 such events, according to the latest Meeting Tourism Measurement report carried out by Ideara for Madrid Convention Bureau (MCB). This same study indicates that a total of 20,320 meetings were held in the capital in 2017 – 15% more than in 2016. These events have welcomed 1,155,645 participants, no less than 10% more than in 2016./