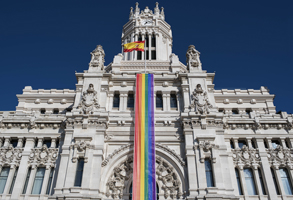 WorldPride Madrid 2017 and EuroPride 2017 will be held from 23 June to 2 July, and the main event will be the WorldPride LGBT parade.

In Carmena’s words, “Madrid was one of the first cities in the world to take steps towards fulfilling the need for recognising sexual identity, which causes humanity so much suffering when it doesn’t get recognition. That’s why we give you a warm welcome and assure you that it will be an absolutely unforgettable WorldPride day of celebration.”

Juan Carlos Alonso, WorldPride 2017 general coordinator said that “Madrid Pride has transformed our city into a different place, full of freedom, equality, celebration and a lot more besides. With WorldPride Madrid we want to share the Madrid spirit with the entire international community.”

WorldPride is an event held by InterPride, the international association of LGBTI Pride organisers whose mission is to empower Pride organisers all over the world to promote the values of an egalitarian society. The event has previously been held in the cities of Rome (2000), Jerusalem (2006), London (2012) and Toronto (2014).

The aim of both InterPride and this event is to promote the rights and visibility of the LGBTI community. Hosting WorldPride requires commitment from the organisers across a number of areas, including human rights promotion activities and a high profile role for LGBTI organisations and collectives during WorldPride, offering inclusive activities to suit the different forms and sensitivities within the LGBTI community plus promoting WorldPride internationally.

While Pride is in full swing this year, an InterPride delegation will be visiting Madrid to inspect the various locations where the 2017 programme will take place, as well as attending the different events scheduled during this year’s Pride, which is being treated as a major dress rehearsal for next year. The tour will take in city venues including the Cecilio Rodríguez gardens, CentroCentro, Matadero, Madrid Río and a number of settings and locations for this year’s Pride.