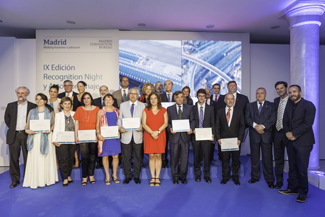 Last 8 of July Madrid Convention Bureau, which is attached to the Madrid Destino Tourism Department (Madrid City Council), held the ninth edition of Recognition Night. Since 2008 the event has been recognising the voluntary work of key figures in the academic, scientific and business arenas and in Madrid-based associations who have promoted the city as a venue for national and international congresses.

The tribute ceremony, which took place at Neptune Palace (Palacio de Neptuno), was presided over by Celia Mayer, who is the Delegate of the Department of Culture and Sport as well as the president of MCB. It drew some 200 people, all of them important players in the city’s congress culture, from public bodies such as the City Council, official professional schools and research centres, companies with direct links to the tourism sector and professional congress organisers and congress centres.

This event helps to establish and strengthen ties between Madrid City Council and all of the players involved in the organisation of congresses. Moreover, MCB’s collaboration with these professionals helps foster the attainment of new large congresses for the city.

Since 2008, 163 key figures have received recognition from the City Council. These individuals are associated with congresses that have been so important for the city like that of the European League Against Rheumatism (EULAR), a congress held in 2013 (16,000 delegates) which will return to the city in 2017, and the World ATM Congress, which was held in Madrid this year and has confirmed the Spanish capital as the event’s permanent annual venue until 2022.

Some of the professionals honoured in this edition of the ceremony were ATCA President Peter Dumont, for the World ATM Congress; Coral González, for the 7th Ibero-American Pedagogy Congress; and Joaquín Sastre, President of the SEAIC (Spanish Society of Allergy and Clinical Immunology), for the World Congress of Asthma 2016. The last of these professionals, for example, explained during the tribute ceremony that Madrid offers everything needed to act as host for a congress with a large number of attendees. “I believe that it is one of the best connected cities in the world, which makes it easy to bring professionals to this city”, he stated. He also recognised MCB’s role as “an office that’s fundamental in the organisation of these sorts of events, especially international gatherings. When the agencies that organise them aren’t from here, they lack the experience or the knowledge of everything that Madrid has to offer”.

Recognition Night aims to highlight the voluntary and selfless work and determination of those honoured, who have strived to make Madrid the venue for their congress. Moreover, their attitudes serve as an example to new potential “ambassadors”, encouraging them to promote the city as a venue for future events, in addition to conveying their individual involvement and interest in Madrid, its institutions and its tourism firms.

To organise Recognition Night MCB worked in collaboration with three of its partner companies: first, the venue itself, Neptune Palace, which was recently restored to enable it to host the capital’s key events and institutional ceremonies; second, Abadías, a company specialising in the design, production and supply of promotional material; and finally, the catering firm Mónico Gourmet.

Madrid is one of the top global destinations for congress tourism. In 2015 it hosted 2,236 congresses. The city is ranked fifth, alongside London, in the ranking published by the International Congress and Convention Association (ICCA), one of the sector’s most prestigious indices. At the national level and in terms of number of congresses, Madrid is the foremost congress destination in Spain.

Madrid Convention Bureau is a specialist department of the company Madrid Destino whose main goals are the promotion of Madrid as an ideal destination for holding all types of meetings, from conferences and congresses to incentive trips and actively winning any of these meetings.