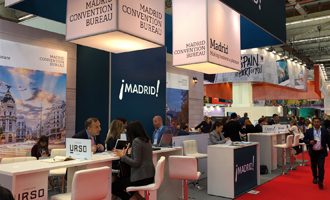 The city of Madrid has been in Germany for a few days, presenting the attributes that make it a leading MICE tourism destination. Madrid City Council’s Tourism Department, via Madrid Convention Bureau (MCB), took part in a new edition of IMEX Frankfurt, a major annual international forum for the MICE sector (Meetings, Incentives, Conventions and Events), which was held in the German city from 15 to 17 May.

The City Council’s participation in the event –attended by 3,500 exhibitors from over 150 countries, with more than 5,000 registered buyers– is part of its international promotion strategy to strengthen Madrid’s image as a leading destination for the organisation of professional meetings in Europe. Business tourism is a key segment which helps to develop and bolster Madrid’s economy as well as to reduce the seasonality of tourism.

To demonstrate Madrid’s quality and professionalism as a MICE destination to representatives from specialist companies and agencies, the capital had its own stand where a dozen companies and bodies linked to its tourism industry were also represented.

The stand was designed by the company Tridente, and it was the site of a joint endeavour to paint the most attractive picture possible of Madrid as a MICE destination. Its enormous potential to host major events was highlighted, as was one of its most distinctive attributes: its unique range of complementary cultural and leisure offerings. All of this makes Madrid the perfect choice to host any kind of event.

More than 300 meetings with industry professionals

With the aim of supporting the sector and creating business opportunities, in addition to the usual meetings with visitors to the stand a programme of meetings with potential buyers was also organised. Madrid Convention Bureau had scheduled more than 80 meetings for the three days that the exhibition last.

Meetings were also held by the 12 companies affiliated with MCB which were taking part in this edition: IFEMA exhibition centre, the DMCs In&Out, Exclusive Spain Tours, Ovation, Cititravel and All Spain Travel, the hotels VP Metropolitano, NH Eurobuilding, Urso and Santo Domingo, the PCO AIM and the special venue Ramsés.

In total, some 300 pre-scheduled business meetings were held, enabling new contacts to be made and deals to be closed with some of the sector’s key agents, such as representatives from international associations, specialised media and events agencies.

New at this year’s edition, and with the aim of promoting sustainability in the area of professional events, Madrid Convention Bureau will reuse all of the graphic materials employed in its stand (items such as tarpaulins, fabric, etc.) to create promotional material for the city of Madrid.

Sessions with the ICCA and Best Cities

The associations ICCA and Best Cities, both of which MCB is a member and which were attending IMEX to capitalise on its potential as a meeting place, in parallel organised professional meetings which MCB has also attended: the annual meeting of the Iberian Chapter of the ICCA, the ICCA’s Association Evening, and parallel Best Cities meetings. Particularly noteworthy among the parallel meetings has been the biannual meeting of the Best Cities Association’s Board, which discussed the organisation of an extraordinary meeting in the Spanish capital which will aim to evaluate the association’s future strategy as an alliance of host cities for international conferences.

In a complementary endeavour, in addition to promoting Madrid at IMEX Frankfurt, Madrid Convention Bureau also collaborated with the Meliá hotel chain on a multinational pre-tour for 120 buyers, and with NH Hotels on three fam trips for clients from Brazil, the United States and Mexico. Moreover, it organised a fam trip from 10 to 13 May for six clients from Southeast Asia, in partnership with Turkish Airlines. Furthermore, this month MCB is attending the first fair devoted to business travel, Expo Turismo de Negocios, as one of its partner organisations. The fair is taking place on 21 and 22 May at Ifema./