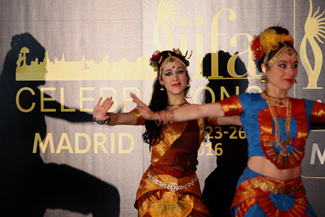 From 23 to 26 June, Madrid hosted the annual International Indian Film Academy (IIFA) awards ceremony, celebrating the event alongside the entire Bollywood film industry. The city played a role in an international show that went beyond handing out film awards, encompassing the world of music, fashion and culture and helping to strengthen the ties between Madrid and India.

The IIFA Green Carpet and Awards (the award ceremony itself); the IIFA Rocks music gala, which featured the best artists in the Indian music industry; and a third gala called the IIFA Stomp & Rang Jam, which showcased urban trends (electronic music, fashion and much more).

In addition to this weekend, a meeting was also held between a Global Business Forum organised by the Federation of Indian Chambers of Commerce and Industry (FICCI) and the Spanish Chamber of Commerce.

Impact of the Gala

The IIFA Awards are an event of global importance that can draw thousands of tourists to a city. According to the most recent figures, Madrid received 15,000 visitors. This translated into an economic impact of over 10 million euros which directly benefited the city.

Over 500 international reporters covered the event, resulting in large-scale promotion of Madrid not only in India but also in areas where Bollywood has a hold, including parts of Southeast Asia, the Far East and Europe.

Given the power and influence of the film industry in terms of its ability to attract tourists, the IIFA Awards are the best letter of introduction that Madrid could send to a market of 1.3 billion people. In India the middle class already comprises 300 million people, and they have increasing economic resources with which to take international trips.

IIFA-MADRID 2016 Weekend will be broadcast in 127 countries, with a potential audience of 800 million viewers, not only during the event itself but also on a deferred basis on two further occasions: Diwali (November) and Christmas.

The Global Business Forum, for its part, is a mechanism that enables two strategic sectors for India and Spain to come together. Moreover, as Bollywood is the most prolific of the world’s film industries, gaining a foothold in its production circuit means an additional boost for the film industry and is an excellent tourism marketing tool for the city.