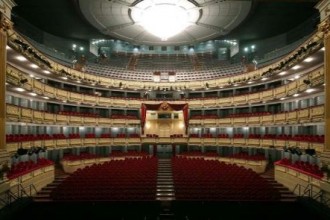 On 6 and 8 May, Madrid’s Teatro Real hosted representatives of nearly 150 theatres and opera festivals from all over the world at the Opera Europa International Conference, in which more than 40 countries took part.

This year’s International Conference coincided with European Opera Days and the main theme was the use of new technology as an instrument for publicising and promoting opera. The Teatro Real was the setting for the launch of the new online opera platform, with 15 theatres participating in the first phase.

The Teatro Real joined in the celebrations with a series of initiatives. The main event was the live broadcast of La Traviata on 8 May via screens set up in various locations around Madrid, in Plaza de Oriente and the Prado Museum, the Reina Sofía National Museum, the Thyssen-Bornemisza Museum, Matadero (Casa del Lector), Canal Foundation, Francisco Giner de los Ríos Foundation, Conde Duque Cultural Centre and the Italian Cultural Institute in Madrid.

On Saturday 9 May an Open Day was held from 10am to 3pm, enabling members of the public to visit the most iconic areas inside the Teatro Real free of charge.

Guided Tours of the Teatro Real took place from 4 to 10 May at the price of 3 euros.