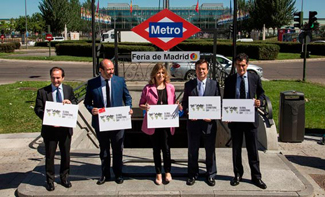 As of June 26, the metro station formerly known as Campo de las Naciones, on Line 8 that joins the city centre with the airport, will take the name “Feria de Madrid,” as it is located by one of the accesses to the trade fair venue.

With this initiative, announced in the framework of Global Exhibitions Day, the Madrid Regional Government, responsible for managing the Madrid Metro, underlines the importance of trade fair activity as one of the economic driving forces that generates wealth and employment in the region. IFEMA’s trade fair and conference activities represent earnings for the region of 2.4 billion euro and the creation of 44,000 jobs, in addition to being the main catalyst for business tourism in the country. Extrapolating global data, trade fairs produce approximately 100 billion Euros and create 700.000 direct jobs.

The station used by visitors to IFEMA will thus be renamed Feria de Madrid, appearing as such on maps and visual supports. According to official sources, this will establish a clearer association between the IFEMA trade fair complex and its Metro station. IFEMA is visited annually by over 2.9 million people from 174 countries, many of whom use the metro network.

Line 8, linking the Airport with Feria de Madrid, is the fastest line in the whole network, with 16.5 kilometres, eight stations that service 45,000 users a day.

Furthermore, the initiative comes at a time when IFEMA is developing an important expansion strategy, with a sustained annual growth horizon of 12%, which will allow the institution to double its turnover, and increase its activity in excess of 200 million in 2022.  In 2017, the official calendar already features over one hundred trade fairs, conferences and events, alongside another 450 professional events. The goal for this year is to exceed 30,000 exhibiting companies, 3 million visitors, and 1 million square metres of net exhibition space.