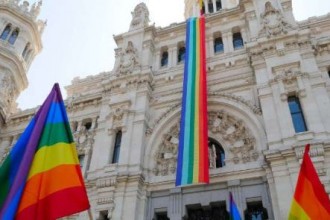 The start of summer in Madrid is inextricably linked to one of the most eagerly awaited festivals of all. The flags and bunting decorating the Chueca neighbourhood signal that the Gay Pride celebrations, an example of what this open, cosmopolitan and diverse city stands for, are underway. This year, the proclamation was given by actress Cayetana Guillén Cuervo and film director Alejandro Amenábar.

A host of artists took part in the festivities. In addition to the stage in Plaza de Chueca, there were other stages around the city-centre including in Plaza del Callao, (where the Mr. Gay Pride Spain ceremony was held) and in Plaza de Santa María Soledad Torres Acosta, where bands played live music throughout the festival.

Another key location on festival days was Calle Pelayo, where one of the most entertaining events of Gay Pride took place: the famous high-heels race. The stage in Plaza del Rey was very lively and once again hosted the Muestra T Cultural Festival.

The festival also featured theatre, screenings and exhibitions. One exhibition that attracted a lot of interest is Amargo de Angostura, which was held in La Cocina de San Antón, in San Antón Market (Augusto Figueroa, 24). This exhibition displayed photographs by Dominik Valvo that pay tribute to images by Tom Papageorge, with references to New York’s legendary club Studio 54, inspired by nightlife.

The high point of the festival was the parade on Saturday 4 July, the biggest in Europe, with an endless stream of floats. It started near Atocha station and, after moving along Paseo del Prado went to Plaza de Colón, where there was a stage with no shortage of live music.