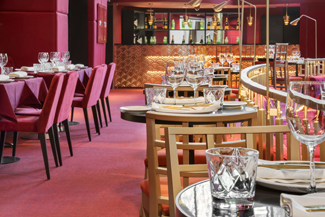 Shows and gastronomy now converge at Florida Retiro, one of the city’s most emblematic venues in a privileged location right in the green heart of Madrid, El Retiro Park. Bringing a period of inactivity to an end, on 1 October it reopened its doors after undergoing a complete transformation.

With its iconic dome as its calling card, refurbished and decorated by interior designer Pascua Ortega and the architecture designed by Guillermo García-Hoz, the space boasts an à la carte restaurant, a tapas bar, a spectacular sky-high terrace, a market area with several themed stalls and a nightclub that will quite likely become a new icon of Madrid nightlife, plus a new and iconic venue for holding events up to 900 people.

From an architectural perspective, the new Florida Retiro maintains both its emblematic dome and the facade of the ‘Casa del Contrabandista’ (Smuggler’s House), one of King Fernando VII‘s ‘whims’, built in 1814 by architect Isidro González Velázquez. The restoration project has respected the historical building and preserved the great ‘blood wheel’ (a water wheel pushed by pack animals), and stands in an exceptional landscape covering 125 hectares, surrounded by more than 15,000 trees.

The diversity of experiences is one of the pillars that supports the new Florida Retiro, a stopping-off point or destination that, thanks to its five leisure and entertainment areas, adapts to different needs, preferences and times of day.

El Pabellón is Florida Retiro’s à la carte restaurant, a cool, elegant place with low tables, a grand central bar presided over by a tree and large windows offering views of the park. The establishment offers urban cuisine, based on traditional recipes with a modern conception that focuses on the local larder using locally sourced produce committed to organic production, craftsmanship and sustainability.

This is an area half open to the park filled with the spirit of a casual encounter. It stands out for its informal and cheerful atmosphere, and its tapas and portions menu takes on the challenge of tightening the screw on Madrid’s traditional range of recipes, but without losing its idiosyncrasy.

La Terraza, an oasis of peace

Located on the rooftop of El Pabellón restaurant, La Terraza de Florida Retiro is one of the city’s most privileged and magical spots. A place hidden among tree tops from where you can enjoy the Madrid skyline, the sunset and an unprecedented view of the emblematic Florida dome. An ideal spot for lunch or for enjoying the first drinks of the evening; its offering is based on the ‘raw bar’ concept, serving ceviche, sushi, sashimi, rolls and the odd Thai-inspired hot dish.

This 360-degree culinary experience is rounded off with a food stall area featuring high bar tables both indoors and out, as well as several stalls bearing the names of icons related to El Retiro Park.

There’s no doubt that the heart making this cluster of experiences and emotions beat with life, located right in the middle of the capital’s green lung, is La Sala.

With a magnificent mise en scène, this iconic spot that forms part of the collective memory of many generations of local residents has been updated to ultimately become an internationally recognised showcase of trends. In other words, it aspires to be a reference of creativity comparable to the cultural initiatives of major capital cities around the world, where the most modern and innovating aspects of showbusiness will shine.