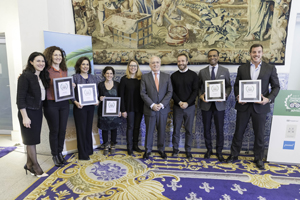 Five hotels from the Hotel Business Association of Madrid (AEHM) received the hotel industry’s  ‘Oscar’ for the excellence and quality of their services at the 15th edition of TripAdvisor’s Travellers’ Choice Awards in 2017.

Representatives from Hotel Orfila, Barceló Emperatriz, Artiem Madrid, Artistic B&B and Only YOU Boutique Hotel Madrid collected the awards in a ceremony held on 1 March in the Royal Hall at the historical building of Casa de la Panadería in Plaza Mayor.

The event, which was attended by Miguel Sanz, the Director of Tourism of Madrid, among others, highlighted the hotel sector’s firm commitment to its customers, whom it caters to with unmatchable value for money, a range of exclusive services and a long list of experiences that encompasses everything from gastronomy to culture and leisure.

“The fact that five of our hotels have won the Travellers’ Choice Awards makes us proud of the quality of the establishments available in the Region of Madrid. The capital’s hotel sector is making a significant effort to achieve ‘top of mind’ awareness among the tourists that visit us, and it would seem that we’re doing our homework well”, said Mar de Miguel, General Secretary of the AEHM.

Mar de Miguel also pointed out that the sustained increase in the region’s overall score, which went from 4.01 in 2012 to 4.13 in 2016, “reflects our hotels’ commitment to offering something more than service”. “We want customers to view their stays in our hotels as a unique and one-of-a-kind experience”, she added.

The event was brought to a close by Gabriel García, President of the AEHM, who thanked the City Council and TripAdvisor for their assistance in driving tourism in the Region of Madrid. García admitted that much more work remains to be done and focused his speech on the important role played by culture and leisure in strengthening the ‘Madrid Brand’. He urged stakeholders to continue to improve the region’s image both home and abroad.