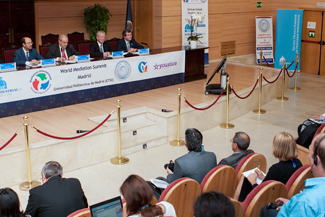 Among the nearly forty events for which MCB provided some sort of logistical or media support in the past two months, of particular note was the welcome reception held for the 25th National Law and Health Congress on 8 June in the Royal Hall at Casa de la Panadería, as well as MCB’s collaboration in promoting the Complutense University of Madrid’s 2016 Summer School and Courses.

Similarly, as part of the European Cultural Heritage Congress (Madrid), MCB organised a luncheon on 26 May. The congress, organised by the Europa Nostra Association, took place from 23 to 26 May at Conde Duque Cultural Centre, among other venues. Its closing ceremony featured a speech by the Mayor of Madrid.

In the business arena, MCB provided support for events such as the World Mediation Summit (7 to 10 June, with 350 attendees); the Vivadent Symposium (10 June, 1,200 attendees); and the anniversary convention of a food-industry company (25 June, 1,000 attendees). Of particular note due to its economic impact on the city was the visit by companies belonging to the Chinese conglomerate Tiens, which chose Madrid as the destination for an incentive trip for 4,000 employees from 4 to 10 May, and Infinitus, which also organised an incentive trip for 800 people at the end of June.