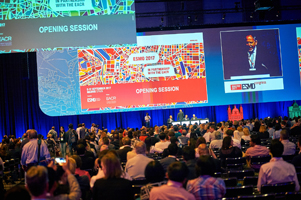 The European ESMO congress will take place from 18 to 22 September 2020 in IFEMA, Feria de Madrid.

ESMO event will have an economic impact on the capital of 65 million euros in direct spending and more than 200,000 overnight stays, not to mention the income from the organisation of parallel meetings.

The commitment shown to and the confidence placed in Madrid as a destination is the result of the capital’s excellent MICE tourism offer, and of more than a decade of hard work promoting the destination and capturing business by the Tourism Department of Madrid City Council, through the Madrid Convention Bureau (MCB)

Madrid is a benchmark city for meetings within the medical-scientific sector. Of the seven congresses that attracted more than 7,000 participants to the city in 2017, five of them belonged to this sector

Just a few days before Madrid is set to organise the World Transplant Congress, the capital has been confirmed as the venue for yet another important medical-scientific congress. The city of Madrid will host the 2020 Congress of the European Society for Medical Oncology, ESMO, a professional gathering that previously chose the city of Madrid as its venue in 2014 and 2017 – this latter event achieved record participation by bringing together almost 25,000 professionals (of whom more than 90% were from overseas).

ESMO 2020 will take place from 18 to 22 September in IFEMA, Feria de Madrid. Its programme will be the result of work by a scientific committee comprising more than 300 international experts under the leadership of its president, Professor John Haanen, a global expert in the field of immunotherapy.

A reference meeting that will put the spotlight on Madrid and will have a major economic impact on the city: 65 million euros in direct spending in the city and more than 200,000 overnight stays, according to initial estimates. To these figures we should also add the income from a series of parallel meetings organised around the Congress by medical organisations and laboratories, such as expenditure on facilities and ancillary services, transport, catering and other activities.

The candidacy of Madrid

The Tourism department of Madrid City Council, through the Madrid Convention Bureau (MCB), first contacted the organisers of this European congress in 2011, with a view to it taking place in Madrid in 2014. After that first highly successful congress in Madrid, the capital was once again a candidate to host the congress three years later, in 2017. Madrid’s candidacy won the day and the ESMO Congress was held for the second time in the city, once again achieving great success and record numbers of attendees. David Noack, the Director of Madrid Convention Bureau states that, “we are proud that Madrid is going to be the venue of the ESMO Congress for the third time”. “We are grateful for the opportunity that this association has given us to demonstrate once again that our city can successfully host professional meetings as relevant and important as this”.

More and more large international events are choosing Madrid as their venue. A commitment that is the result of the excellent offer that Madrid as a destination makes available to professionals working in the MICE sector (Meetings, Incentives, Conventions and Events), not to mention the work carried out by the Madrid Convention Bureau. For over a decade, this body, an agency of the City Council’s Tourism Department, has been developing a strategy to promote the city and to attract major professional congresses and meetings. That strategy has made it possible to position and consolidate Madrid in the top ten congress tourism destinations in Europe and the world.

A benchmark destination for the medical-scientific sector

The fact that the ESMO Congress is being held in Madrid reinforces the capital’s image as a benchmark destination for the medical-scientific sector. Of the seven congresses that attracted more than 7,000 participants to Madrid in 2017, five of them belonged to the medical sector, namely the Annual European Congress of Rheumatology (EULAR), with 14,300 attendees; the 54th European Renal Association and European Dialysis and Transplant Association (ERA-EDTA), with 7,500 attendees; the 22nd Congress of the European Haematology Association (EHA), with 15,000 attendees;  the Annual World Dental Congress 2017 (FDI), with 10,000 attendees; and the 2017 edition of ESMO, with 24,000 participants. In total, these events attracted more than 70,000 professionals from the medical and scientific sectors.

The European Society for Medical Oncology (ESMO) is the leading professional medical oncology organisation, with more than 16,000 professional members in over 130 countries. Its aim is to develop this medical specialty, promoting a multidisciplinary approach to the treatment of and care for cancer patients throughout Europe. The European Association for Cancer Research (EACR) collaborates with the congress. This is a professional European association that gathers together more than 10,000 professionals involved in cancer research throughout the world. Its mission is the advancement of cancer research for the public good./