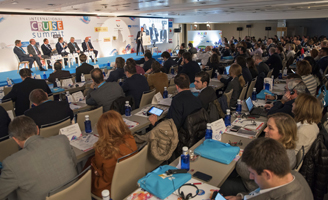 Leading executives from cruise companies will attend the event, organized by Cruises News Media Group, which in its seventh edition is already an international reference

The International Cruise Summit will gather, in its seventh edition, the most relevant professionals of the cruise industry, who will meet in Madrid during 28 and 29 November to discuss this outstanding tourism sector that generates more than 1,300 million euros in Spain.

Officials and executives of cruise companies, port authorities, tourist destinations, tour operators, shipping agencies, travel agencies, suppliers and experts of the sector, will be present at one of the most important cruise congresses in the world.

The inauguration will be carried out by Puertos del Estado, Tourspain, and the Madrid City Council, after which, Airam Diaz Pastor, President of MedCruise will address the delegates to give them the keynote speech. During the two days, several round tables and presentations will address topics such as “The pulse of the cruise industry”, “Changes in the European passenger profile”, “Markets trends impacting on cruise ports”, or “Planning tourist destinations”, among others.

More than 300 delegates from around the world will attend this event at the NH Eurobuilding Hotel. Speakers will include Edie Rodriguez, Americas Brand Chairman and Corporate Special Advisor of the luxury company Ponant, as well as Lars Clasen, Managing Director of The Ritz-Carlton Yacht Collection. In fact, this edition is notable for the attendance of exceptional luxury companies as well as new ones; for example, Virgin Voyages, represented by Craig Milan, Vice-president Itinerary / Destination Development. TUI Cruises, MSC Cruises, Royal Caribbean, Costa Cruises, Pullmantur, Norwegian Cruise Line, Silversea, Marella Cruises, Cruise & Maritime Voyages will also be represented by senior executives.

This seventh edition contributes to enhancing Spain’s image as the second most popular European cruise tourist destination and the positioning of Madrid as a pivotal city in hosting international congresses. During 2016, 8.5 million cruise passengers visited the Spanish coast, which meant an economic benefit of more than 1,300 million euros and 28,000 jobs. Barcelona leads European ports with 2.68 million cruisers in 2016, 5.79% more than the previous year. Also noteworthy are the Balearic Islands ports, with 1.8 million cruisers, and Las Palmas, with 1.1 million.

Questioned because of their environmental impact in some cities, cruise ships face the future committed to sustainability, having already installed in the majority of the fleet, scrubbers that limit their emissions to the atmosphere, and building new ships powered by Liquefied Natural Gas, the cleanest of fossil fuels.