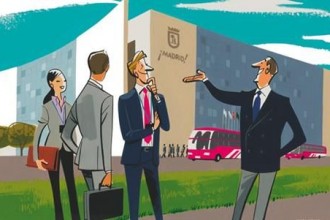 Madrid has consolidated its position as the third destination in the world and top destination in Spain for hosting the highest number of international congresses.

Of the total number of meetings held in Madrid, 2,266 were congresses, 2,585 conventions and 7,604 one-day events, mainly in the chemical and pharmaceutical, medical, teaching and research sectors.

The impact of meetings tourism in Madrid grew in 2014. According to the report produced by Madison Market Research, this tourist segment generated an economic impact in the city of 816 million euros, an increase of 7.4% compared to 2013. The rise in international meetings (+3.2%) and of foreign delegates (+18.4%), the ones who spend more money per day in the city, has favourably influenced these results.

Despite a slight drop in the number of meetings compared to 2013, in 2014, Madrid received a higher number of delegates, reaching a total of 1,210,000 participants (+12.7%). These delegates generated 2.3 million overnight stays in Madrid’s hotels. The average length of visits to the capital also increased, standing at 2.97 days, meaning that delegates are staying longer in Madrid than in 2013.

Madrid Convention Bureau (MCB), has played a key role in the capital’s success, capturing meetings that generated more than 65 million euros for the city.