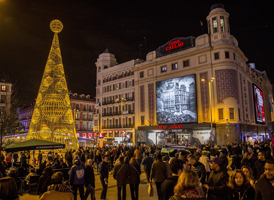 In December, Cine Callao, one of Madrid’s most emblematic cinemas and venue for events, celebrated its 90th anniversary with a large party where it paid homage to the world of film. Well-known figures from the film and performing arts industry attended the event, which featured no shortage of nods to the cinema world, while screens outside the iconic building in Plaza del Callao projected images which, via augmented reality, transported the public from the square to the Madrid of the 1920s, in the style of a silent film from the era.

The ceremony, hosted by famous presenter Carlos Sobera, included the screening of a video commemorating Cine Callao’s 90 years of history – in which film industry figures such as director Chus Gutiérrez, producers Enrique Cerezo and Enrique López-Lavigne and actress Terele Pávez, among others, reviewed the cinema’s important role in the history of film in Madrid – as well as the unveiling of its new corporate image. Attendees also had a chance to take photos with some of the most popular faces and characters in cinema history, as they wandered around the room. Marilyn Monroe, Darth Vader, the Marx Brothers, Audrey Hepburn, Humphrey Bogart, Indiana Jones and Uma Thurman’s character in Kill Bill posed with guests at the party, which featured an abundance of music from well-known movie soundtracks, played live by the band Spring Quartet, as well as a huge birthday cake that was enjoyed by those present.

A history worthy of the silver screen

Built in 1926 by Luis Gutiérrez Soto, the historical Cine Callao building is the finest example of Art Deco architecture in the capital. It opened as a cinema on 11 December of that same year, showing the Luis Candelas film El bandido de Madrid.

Always at the forefront of culture, it was the first cinema in Spain to screen a sound film with dialogue, El Cantor de Jazz, on 13 June 1929, as well as the first film shot in Spanish in Hollywood, El Cuerpo del Delito, on 21 May 1930. Similarly, Cine Callao also screened the premiere of the first colour film in Spain in 1935, and the first 3D feature in 1953.

The cinema was designed in the pure American style of the era, that is, without box seats for the aristocracy and with an unobstructed view from every seat, of which there were 1,300 at the time. Its terrace, which is no longer in use, was built for the screening of outdoor film sessions, making it one of Madrid’s first summer cinemas.

Although the building’s basement was initially designed to house a live music café, it ultimately became a spacious pool hall with 32 tables and an American-style bar where a barman served cocktails to the clientele. The space, which was used as a soup kitchen during the Civil War, was eventually occupied in the 1970s by the popular nightclub Xenon, before being converted back into a cinema in 1997.

Despite the passage of the years, Cine Callao, located in Europe’s third busiest square and the busiest in Spain (over 113 million people pass through it each year), has managed to adapt to the new times, refurbishing its facilities (currently divided into two rooms, with a combined capacity for over 1,200 audience members) and incorporating the latest advances in technology, sound, images and lighting.

Venue for the most important premieres

Cine Callao has hosted the most important film premieres of all time, and the biggest national and international film celebrities in recent decades have walked down its red carpet (Tom Cruise, Will Smith, Bradley Cooper, Daniel Craig, Richard Gere, Jennifer Aniston, Salma Hayek, Antonio Banderas, Elsa Pataky, Mario Casas and, more recently, Brad Pitt and Penélope Cruz, among countless others). In the past few years it has also begun to host all sorts of other events (50th Anniversary of West Side Story, Flag of the Red Cross Party, Madrid Premiere Week Film Festival, the Feroz Awards, the presentation of the Microsoft video game Halo 4, etc.), and to broadcast, on the building’s two facades, cultural and commercial content on the giant digital screens which in 2011 replaced the classic posters used in former years to announce the films being shown.