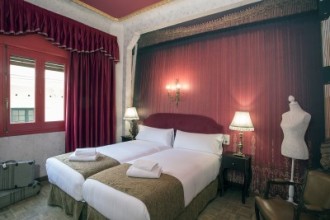 Casual Hoteles, the Valencian chain specialising in themed hotels, has opened its first hotel in Madrid. The establishment, located in the city centre and inspired by the performing arts, goes by the name Casual Madrid del Teatro. It is the seventh hotel in the chain, which already has a presence in Valencia, with four establishments, and in Seville and Bilbao, with one in each city. As part of the chain’s expansion strategy, new hotels are also planned for Madrid, Valencia and other Spanish cities.

Casual Madrid del Teatro has 38 rooms, all of which are themed. The historic 1925 building, which boasts four floors and a rooftop terrace, has been completely remodelled and was formerly the Hotel Santander.

Located at 1 Calle Echegaray at the corner of Carrera de San Jerónimo, next to the lower house of parliament (Congress of Deputies), Gran Vía, Barrio de las Letras (Literary Quarter) and Puerta del Sol, the hotel’s central location is in line with those of the chain’s other establishments.

The hotel offers the chain’s characteristic services: free Wi-Fi on the premises and portable connection for use across the city, 43-inch Smart TVs, complementary baby packs, a buffet breakfast and more.

According to Juan Carlos Sanjuán, the firm’s Managing Director and founder, the opening of Casual Madrid del Teatro represents “an important step for our chain. Not only due to its location in Madrid, where we expect to open new establishments in 2016, but also because of its originality, design and the mise-en-scène tackled by our team for this establishment, of which we are extremely proud and which offers quality, value for money and extensive services to any tourist visiting the city”.

Casual Madrid del Teatro was designed as a tribute to major plays from global theatre history (both Spanish and international), to musicals that made it big on Broadway or in Madrid and to the world’s top theatres.

Casual Hoteles was founded in 2013 in Valencia and offers accommodation in centrally located hotels with themed rooms inspired by various artistic fields, including Fine Arts, Humanities, Music, Film and Culture.