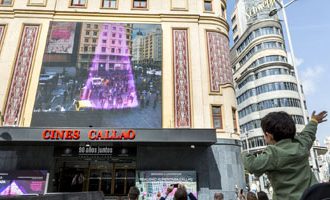 The first permanent Augmented Reality platform launched in Spain was presented last April in Madrid by Callao City Lights, in collaboration with Wildbytes. This tool will enable brands to incorporate the latest advances in AR technology in their advertising campaigns on the outdoor screens at Cines Callao. In addition, as the platform is permanent advertisers will save significant amounts of time and money associated with production costs.

The new interactive and customisable digital platform will allow a real-time transformation of Plaza del Callao into the brand’s own individual universe, enabling the public to see themselves onscreen and making them the stars of the action. Moreover, this technology will make it possible to associate a particular campaign with live events of all sorts (sporting events, cultural events, etc.) or with weather, as well as to exponentially increase its viralization on social media and to link up to e-commerce platforms. It will thus, for instance, make it possible for an advert for a brand of ice cream to appear onscreen when the outside temperature rises above 30 degrees, or for a campaign to be shown only when it’s raining, or for onscreen content to change based on what’s happening on an e-commerce microsite or an online shop. There’s a whole world of possibilities for creating experiences relevant to the target audience that passes through this part of Madrid on a daily basis, amounting to over 112 million people per year (Geomex). It’s not for nothing that Callao is the third most visited square in Europe, after Piccadilly Circus (London) and the square that’s home to the Louvre (Paris). It’s the most visited square in Spain.

This new development is the result of an agreement between Callao City Lights and Wildbytes, an agency renowned worldwide for its innovative technology projects, with years of successful collaboration on various campaigns under its belt; for example, the campaign conducted for the launch of the new seasons of various series broadcast by Fox (The Walking Dead, Homeland and Marvel’s Agents of Shield), for which Plaza del Callao was transformed into the universes of these series, filling the square with people and generating over half a million views on YouTube in just two days, or the campaign conducted for the launch of Sephora’s Kat Von D Beauty makeup line, which racked up over 90 million online impressions. A resounding success for the firm at the global level.