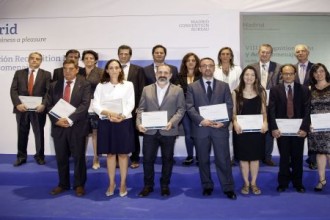 Tourism in general and convention tourism in particular are a driving force in Madrid’s economic activity. For this reason, for the past eight years Madrid City Council, through the Congresses Department (MCB) of Madrid Destino’s Tourism Bureau, has held Recognition Night, an annual event paying tribute to the industry professionals who attract meetings to the capital city, making it one of the leading national and global destinations for congresses.

This tribute ceremony, which took place in the Cecilio Rodríguez Gardens, recognised the work of 17 people from the academic, scientific and business worlds representing some of the key congresses held or scheduled to be held in Madrid this year, drawing over 26,000 professionals from these fields to the city and allowing them to experience firsthand all that Madrid has to offer as a destination, including its infrastructure and the excellent services available for congresses hosted in the city.

Over one hundred professionals recognised

Those recognised at this eighth edition of the event include 143 professionals have now been honoured by Madrid City Council. This underscores its firm commitment to convention tourism and its support of all of the key players that have fostered or are fostering Madrid’s acquisition of national and international congresses, furthering the city’s reputation as a destination for large-scale events.

All of them, along with the rest of Madrid’s tourism sector (hotels, convention centres and professional congress organisers, or PCOs) have played and continue to play an essential role in establishing Madrid as a leading business destination in addition to being a leisure tourism destination. Madrid is now one of the world’s top destinations for convention tourism, according to the ICCA ranking.

Furthermore, Recognition Night serves as the ideal platform for the promotion of corporate networking between the companies associated with MCB.

Recognition Night always relies on the support and collaboration of Madrid-based companies affiliated with Madrid Convention Bureau, representatives from some of the top-quality services that the capital offers to professional meeting organisers. On this occasion, these partners were Mónico Gourmet and the Abadías Group.

Mónico Gourmet is one of Madrid’s most acclaimed catering services for the organisation of events, providing first-class customised services, and the Abadías Group has supplied tailored products for thousands of congresses.

The important people honoured in the 2015 edition of Recognition Night were: