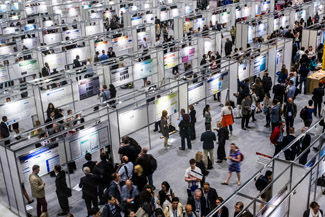 The city of Madrid is once again the destination of choice for European rheumatology specialists. The capital will be hosting EULAR 2017, the European Congress of Rheumatology, from 14 to 17 June this year. The event, organised by the European League Against Rheumatism, will gather close to 15,000 delegates in Madrid, generating some 110,700 overnight stays in hotels across Madrid plus 4,800 outreach activities.

Having held the congress once before in Madrid, in 2013, and coinciding with the 70th anniversary of EULAR, the organisers are once again placing their trust in Madrid and in one of the city’s leading congress venues, IFEMA. Their confidence is proof of the Spanish capital’s quality provision and its ability to successfully stage all kinds of meetings and professional events.

The capital has sealed its reputation as an excellent destination for holding congresses and events. In 2017, Madrid will also be hosting some of the most significant European and international congresses in the science sector, attracting huge numbers of delegates. This group of major congresses alone is expected to generate more than 700,000 overnight stays and more than 180 million euros of direct expenditure in the city of Madrid.

Some fifty bids to be submitted

To maintain the capital’s position as one of the leading congress tourism destinations in Europe and across the world, Madrid Destino’s Tourism Department promotes bids for capturing national and international congresses via Madrid Convention Bureau (MCB). All through this year, some 50 new bids will be submitted for attracting professional events to the capital, mainly in the medical and scientific sectors.

Madrid Convention Bureau is the municipal public body tasked with promoting the city on the international stage and capturing congresses via bid processes involving years of collaboration and work. This effort has contributed to Madrid’s current leadership of the worldwide meetings tourism market.

The celebration of the 70th anniversary of the European Congress of Rheumatology in Madrid will be marked with a series of public initiatives, including the launch of an awareness-raising campaign in the local community while the congress is being held. The event will also coincide with the launch of the EULAR School of Rheumatology, a quality brand designed to provide courses that guarantee excellence in rheumatology education.