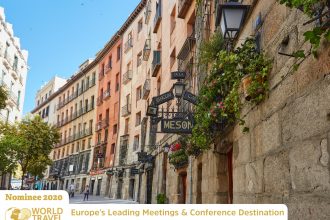 Madrid, nominated for the third time in a row at the European World Travel Awards

The Westin Palace Madrid, Barceló Torre de Madrid, Villa Magna and Intercontinental Madrid hotels are also up for the award, together with the city and the City Council’s DMO, Madrid Destino

On October 20, we expect the celebration of the World Travel Awards ceremony, in its European edition.

These awards, considered in the industry as the Oscars of tourism, recognize the excellence of companies, destinations and professionals in various categories of the tourism industry . They combine the participation of a jury of selected professionals with open voting on the official website. The public voting period will remains open until September 24.

This year, the city of Madrid opts to revalidate the title of Europe’s Leading Meetings & Conference Destination, which it has held since 2018.

Also Madrid Destino, the City Council’s tourism promotion company, opts for an award in this edition, such as Europe’s Leading City Tourist Board, an award for which it had already been nominated on previous occasions.

But Madrid has more oportunities to win in this edition of the WTA, as the nominations also include several emblematic hotels of the city, all of them members of the Madrid Convention Bureau:

Vote for us by clicking here! And remember the voting period ends on September 24!

Will Madrid get it?