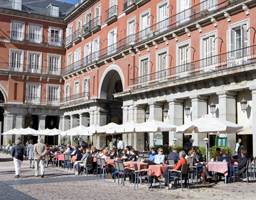 This summer, the city of Madrid was one of the most in-demand tourist destinations. According to the Hotel Occupancy Survey carried out by the National Statistics Institute (INE), the capital received 2,264,687 visitors in June, July and August. This represents the most tourists ever recorded in Madrid during the summer and a figure that definitively consolidates the growth of the sector, the driving force behind economic, social and cultural development.

As regards the origin of the travellers, 54% of the visitors that were welcomed to Madrid during this period came from the international market (1,223,846 visitors), compared to 1,040,841 national visitors, representing 46%. Therefore, the greatest weight came from international tourism, which has grown 5.45% in respect to the same period in 2015, over three times the growth of the national market (1.43%).

Source markets
The main source market to send the most tourists to Madrid was the United States, accounting for 179,927 visitors, doubling the second source market (the United Kingdom), with 93,011 travellers. Italy and France take third and fourth places in the ranking, with 84,156 and 82,321 travellers, respectively. The German market is in fifth position, with 57,155 travellers.

Argentina was the strategic market that grew the most, with an increase of 40% in respect to the previous year. This figure is just over double that of Portugal, coming in second with a growth of 18.6%. Ranking third is the Japanese market, with 11.8%, followed by Italy (10.2%) and the United Kingdom (6.1%).

Overnight stays
Hotel occupancy displayed very good results. For yet another year, the city of Madrid maintains its upward trend, registering an average occupancy rate of 69.73% from June to August. The data on overnight stays over these three months set a new record, with more than 4,500,000 overnight stays. Each traveller stayed an average of two nights, although the length of time is steadily increasing. As regards data on the number of people working in the hotel sector, there was an improvement on last year, with an average of 11,078 people employed from June to August.

Tourist spending
Data on tourist spending are also positive. According to the Tourist Expenditure Survey, foreign tourists visiting the Region of Madrid in June and July 2016 spent a total of €1,572m, showing an improvement of over 30% on last year’s data. The average expenditure was €1,600 (+10%), reaching a daily average of €193. Madrid was the Spanish region with the highest average daily expenditure, ahead of other popular destinations like Catalonia and the average in Spain.

Air connectivity
The improvement of air traffic at Adolfo Suárez Madrid-Barajas Airport also favoured an increase in passengers who chose to fly to Madrid. According to data for 2016, there were once again over 6.9 million passengers. From June to August, the number of passengers arriving in Madrid’s airport increased by 5.41%. There was also a notable growth of the national market, with 8.71% more travellers than last year, compared to a 4.14% growth of the international market./