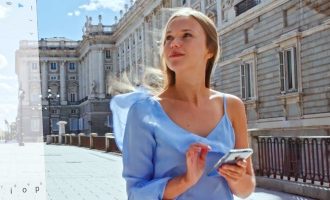 The new MICE video Jane meets Madrid. A path to a unique experience took The Golden City Gate by storm in the “MICE & Event International” category

Madrid has received its first accolade for its latest business tourism video. Within days of being officially released, Jane meets Madrid. A path to a unique experience was awarded the prize for the “MICE & Event International” category at Berlin’s 21st edition of The Golden City Gate international film festival of the tourism industry.

This production by the Madrid Convention Bureau is aimed at the international market. It sheds light on the enormous potential the capital holds to host all types of event and, at the same time, places great value on the commitment demonstrated by the professionals of the Madrid tourism sector.

A site inspection as a common thread

This fictional piece recreates an agent’s visit to the city to research its potential as a business destination, and captures her experience in the capital. This initiative is led by the Madrid tourism industry, which has wholeheartedly given its all to the project showing a great sense of vocation and commitment to the city. In this way, everyone has pulled together to shine a light on the capital on a global level, with the aim of securing its position as the best business tourism destination in the world.

This dynamic and energetic short film tells the story of Jane, who is in charge of organising a large-scale business event in the city of Madrid. Step by step, we see the capital through Jane’s eyes as she discovers and experiences how truly unique it is. Her visit guarantees that her event will be a complete success, and when she leaves the city she will take a piece of it home with her in her heart.

The video follows Jane on her site inspections of hotels and meeting rooms, as she considers various options for her corporate guests, including a gala dinner. Great emphasis is put on the remarkable effort the city of Madrid makes to adapt to the demands of the sector, always in compliance with recommended safety protocols and measures.

What’s more, this production increases the visibility of the great efforts by Madrid Convention Bureau (MCB). With the main aim of promoting the capital as a destination for conferences, events and meetings, this body also endorses the hospitality, availability and professional approach of each and every individual that forms part of the Madrid tourism sector, as a team that is wholeheartedly dedicated to even the smallest details of its work. The video also showcases the great benefits Madrid has to offer as a city, from being able to walk almost anywhere, its incredible attractions, an all-year-round great climate and sunny skies, and not forgetting one of its biggest assets: its people.

Interviews to the Madrilenian professionals

In addition to this promotional video, the Tourism Department has also produced the short film Mice Meets Madrid. Through a series of interviews with the tourism professionals who participated in the main video, it aims to capture the first-hand experiences of people in the sector during the filming of the promotional video and show how they’ve been affected by the health crisis.