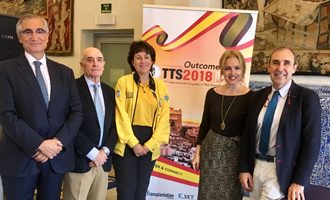 The city of Madrid will host the world’s most important congress in the field of organ donation and transplants.

From 30 June to 5 July the capital will host the 27th edition of The Transplantation Society’s (TTS) congress, which will be attended by over 3,000 professionals who specialise in this field of medicine.

The congress, which is to be held in Madrid, was presented this morning in the Royal Hall (Salón Real) of Casa de la Panadería in Plaza Mayor, at an event featuring José María Morales, Vice-Chair and President of the local TTS Congress Committee, Beatriz Domínguez-Gil, Director of the National Transplant Organisation (ONT) and member of the TTS Council, Valentín Cuerva-Mons, President of the Spanish Society of Transplantation, Amado Andrés, President of the Madrid Transplantation Society, and Isabel Casado, SAMUR deputy director and David Noack, director of Madrid Convention Bureau, both from Madrid City Council.

The congress will be held at Ifema and attended by specialist doctors, scientists, nurses, pharmacists and other health professionals connected to organ donation and transplants. It will have an economic impact of four million euros for the city, with 15,000 overnight hotel stays.

The TTS Congress will be a forum of exchange where scientific and clinical advances will be presented and various topics will be discussed, including care and management problems as well as socio-economic, ethical and regulatory issues relating to organ and tissue transplants. Madrid’s bid to host this congress was an initiative launched by the City Council’s Tourism Department via Madrid Convention Bureau (MCB) back in 2011. In 2014, during the annual meeting of The Transplantation Society in San Francisco, it was confirmed that the city had been chosen to host the event. Madrid beat out bids by other cities like Melbourne, Istanbul, Buenos Aires and Montreal.

The fact that the organisers of important congresses such as this are choosing Madrid as the destination for their events helps strengthen the city’s image as a venue for major professional meetings; a competitive, first-rate destination for MICE tourism that guarantees the success of any event that is organised. It also positions Madrid as a leading destination for medical and scientific congresses, with extensive experience hosting multiple editions of congresses such as those of the ESMO (European Society for Medical Oncology) and EULAR (European League Against Rheumatism).

Spain, a leader in transplants

The choice of Madrid as the venue for this congress also serves to recognise Spain’s leading position in transplant medicine and organ donations. According to the National Transplant Organisation (ONT), Spain ranks first in the world for organ donations. This success is due to the “Spanish Model”, which includes a number of measures to improve organ donation and is a benchmark for the World Health Organisation (WHO) that is replicated in other parts of the world.

Spain continues to be the global leader in organ donation and transplants (26 years in a row). According to the latest data from the Spanish Ministry of Health and the National Transplant Organisation (February 2018), donation rose by 8% in 2017 (with 30% cumulative growth over the past three years), exceeding 5.000 transplants per year for the first time in history.

Of particular note is the second phase of the National Bone Marrow Plan, which achieved record numbers of new bone marrow donors (over 78,000, an increase of 196%), bringing the total number to 357,492. The plan aimed to reach 400,000 donors by 2020, but at this pace the target will be achieved two and a half years earlier than foreseen.

About The Transplantation Society

The Transplantation Society (TTS) is a medical association which has been furthering the development of science and clinical practice in organ transplantation for over 40 years. In Spain the body is supported by the National Transplant Organisation (ONT). In 2010 TTS and the ONT received the Prince of Asturias Award in the field of international cooperation in recognition of their efforts to promote ethical transplant practices. More information at: http://www.tts2018.org/