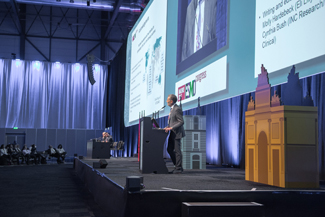 Madrid  hosted the medical oncology sector’s most important meeting for the second time, ESMO congress. Almost 24,000 professionals attended the event, from the 8th to 12th September.

In the wake of the excellent rate of participation in 2014, ESMO chose to bring its congress, a meeting organised by the European Society for Medical Oncology in partnership with the European Association for Cancer Research (EACR), back to Madrid. The congress, which took place at Ifema, easily broke its own record for participation, bringing together almost 24,000 delegates and transforming Madrid into the leading city for the medical-oncology sector, once again proving its capacity for hosting large-scale professional meetings.

With this participation rate, the 2017 annual congress, which had previously been attended by around 20,000 professionals, is now firmly established both in Europe and around the world. According to the organisers, more than 85% of participants at this year’s congress were from abroad.

The excellent response and huge turnout at the meeting will have an enormous economic impact on Madrid’s hospitality sector. Holding this congress in Madrid has generated more than 180,000 overnight stays in the city’s hotels, with a direct repercussion of more than €65 million. This figure does not include the effects of the parallel meetings organised around this event by medical bodies and manufacturers resulting in money spent on venues and auxiliary services, hotels, transport, gastronomy businesses and other activities.

New confidence in Madrid as a destination

The decision of the organisers of ESMO to return to Madrid was based on their satisfaction with and their confidence in the city’s professionals, infrastructure and services, not to mention the institutional support they had received. The City Council, through the Madrid Destino Tourism Department and Madrid Convention Bureau, is committed to attracting large international congresses like ESMO, which position Madrid among the world’s leading business travel destinations.

Madrid Convention Bureau has been working with ESMO’s organisers since 2011, when it made its first bid to host the 2014 congress. The decision was taken to return to Madrid in view of the enormous success of the Madrid congress three years ago.

Regarding scientific dissemination, this year’ ESMO was outstanding for the prominent level of Spanish participation in sessions and speeches, which accounted for 5% of all the works presented. Spain was the second most prolific contributor in terms of the number of studies disseminated, after the United States.

The European Society for Medical Oncology is a leading professional organisation with more than 16,000 professional members from more than 130 countries worldwide. Its mission is to develop this medical speciality and to encourage a multidisciplinary approach to the treatment and care of cancer patients in Europe. It collaborates with the European Association for Cancer Research (EACR), which brings together all parties engaged in cancer research, with more than 10,000 members around the world. Its mission is the advancement of cancer research./