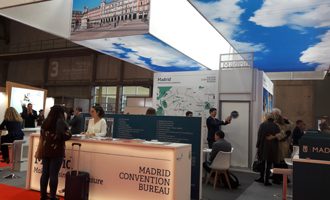 The fair, which was held in Barcelona from 19 to 21 November, attracted more than 15,000 MICE professionals from all over the world

Manned by the Madrid Convention Bureau and 24 associated companies, the Madrid stand hosted some 500 working meetings

Madrid City Council Tourism, through the Madrid Convention Bureau (MCB), has been present once again at the IBTM WORLD fair. It is one of the world’s most important events for the meetings tourism sector, which took place in Barcelona from 19 to 21 November.

The objectives of this action included strengthening alliances, closing agreements and establishing new contacts with agencies, corporate clients and associations around the world, as well as fostering collaborations with other complementary sectors such as the media and event organizers in markets that are of interest to MCB in 2020. In total, the Madrid stand generated around 500 working meetings for the Madrid Convention Bureau and 24 of this organization’s associates.

During the fair, all the new developments that the Madrid MICE sector is currently experiencing were announced, including the opening of hotels, special venues, and new large-scale spaces.

Visitors to the Madrid stand at IBTM World also discovered, through different promotional activities, the gastronomic and shopping offerings of the capital in spaces such as Gran Clavel, the Iberostar Las Letras Hotel and Las Rozas Village.

Madrid attended IBTM with its own stand, which on this occasion covered 120m2. 24 companies associated with MCB were also present, representing all the categories involved in the sector. As on other occasions, sustainability criteria have also been used at this fair in the creation, construction, and recycling of the stand. Specifically, the stand was 100% free of plastic and its decorative canvases will be used to produce merchandising now that the fair is over. In the same way, this year’s merchandising comes from recycled materials from previous fairs.