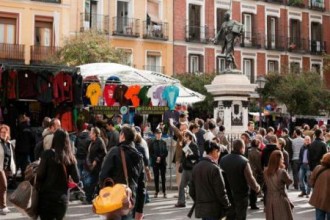 739,061 tourists visited Madrid in July, the highest figure ever recorded for this month.

July data from the Hotel Occupancy Survey conducted by INE (National Statistics Institute) showed that tourism demand in Madrid continued to grow in July, with record highs recorded for both the number of tourists and overnight stays, bringing annual figures to an all-time high.

Meanwhile, domestic tourism brought 336,660 Spanish nationals to the city of Madrid. The largest numbers were from Andalusia, Catalonia and the Region of Madrid.

In the past twelve months, travellers have spent 17,296,510 nights in Madrid.