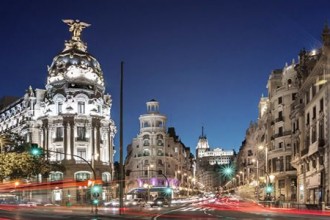 The number of annual overnight stays in the city of Madrid has surpassed 18 million for the first time ever. Data from the EOH (Hotel Occupancy Survey) conducted in March reveal a sharp and intense growth in tourism demand, the highest for any February on record in terms of both numbers of visitors and overnight stays. The growth in demand was helped along in particular by international tourism, which showed year-on-year growth of 14.9%, but domestic tourism also grew by 8.4%.

Nearly seven hundred thousand tourists (691,665) visited the city of Madrid in February, the highest figure ever recorded for any February. Year-on-year growth was 11.2% (12.2% in the Region of Madrid), following a spectacular 10-point rise in comparison to January.

In the twelve preceding months, a total of 8,961,274 travellers visited the city of Madrid, the highest number ever recorded. A year-on-year increase of 5.7%, up 0.3 points from the previous month, made it possible to attain this figure of nearly nine million.

Overnight stays at record numbers in February, too

Overnight stays in February totalled 1,354,811. This was the highest number ever recorded for the month of February, up 15.1% from February 2015 and in line with the growth seen in the Region of Madrid (15.4%). The figure represented a 13-point increase in comparison to the growth recorded in January.

In the preceding twelve months, travellers spent 18,017,220 nights in the city of Madrid, up 7.5% year-on-year and 0.5% points than in January. Growth was higher than that recorded for Spain as a whole, where overnight stays rose 4.9% year-on-year.

Occupancy and employment on the rise

The number of establishments in operation fell by 48 in February, to a total of 759, compared to the same month the previous year. This was due to a gradual fall in the number of hostels (49 less). Despite this, supply grew in high-end segments, resulting in a total drop in hotel beds of 600, to 80,040, a year-on-year change of -0.7%.

As a result, total room occupancy grew by over 6 points year-on-year, rising to 69.51%.

Employment in establishments as a whole rose 1% year-on-year to 11,161, a behaviour which has only been seen sporadically since 2011./